KANSAS CITY, Mo. — A home security camera captured the moments leading to the arrest of a Kansas City, Missouri, man who is accused of killing three of his own family members.

KCPD officers cuffed Rahman Muhammad over the weekend at a home in east Kansas City.

“Police Department. Come to the door,” one of the officers can be heard saying in the security footage near East 46th Street and Montgall Avenue.

Courtesy of David Stewart via KSHB

David Stewart, a neighbor, told KSHB he knew that Muhammad was on parole. “At least that’s what he told me,” Stewart said. “So I thought maybe it was a parole violation, but it seemed kind of excess for that.”

Prosecutors allege that Muhammad stabbed his mother Shirley Muhammad, his sister Tyla Ransom and his brother Jaelin Ransom at a home in the 3200 block of Woodland Avenue.

Charging documents released Monday detail the scene officers found after a relative called them worried that she hadn’t heard from them in days.

Police said in a probable cause statement that the suspect placed a single $100 bill on each of the victims.

“It is a heinous crime. And it’s pathetic. It’s like voodoo,” Sunny Chukwani, who knew the victims, said.

Court records show Muhammad’s mother was concerned about her son’s aggression and was worried Muhammad was experiencing psychotic episodes – and that he frequently said profane things to her.

Amanda Davis, a licensed professional counselor and director of intake services at Saint Luke’s Crittenton Children’s Center, said people experiencing a psychotic episode are not typically a violent threat to themselves or others.

It’s defined more as a disconnection of their thoughts from reality, and there are signs to look for early on.

“And then it usually would come with some kind of intense agitation as well, where they just seem to like not be able to calm themselves or sit still. They might be pacing, that kind of thing.”

After living on-and-off with his father at the home on East 46th Street and Montgall Avenue, Muhammad permanently moved in after his dad passed away more than a year ago. Neighbors said that during that time, he mostly kept to himself. 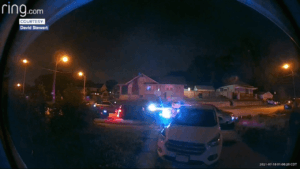 A Ring doorbell captures the moments leading up to the arrest of a man who has been accused of killing three of his family members. (David Stewart via KSHB).

“It’s kind of unsettling,” Stewart said, “to think that you could do something to that to people that you would think you would care about.”

During a search of Muhammad’s, home police discovered a pair bloodstained boxers in a second-floor bedroom. Through a DNA analysis, police said that blood came from one of the victims.

“I’m glad they found her killer,” Jeremiah Gaston, Tyla Ransom’s boyfriend told KSHB on Monday in a message to Muhammad. “I hope you get what you deserve. Because you have to kill three innocent people. You have to take three innocent lives.”

If you notice warning signs of a psychotic episode, it’s important to talk with a mental health professional as soon as possible. The National Suicide Prevention Lifeline, at 1-800-273-8255, can help those in need find local resources for the situation.

For those who need immediate help, call 911. Davis recommended asking for a crisis intervention officer, who is trained for mental health situations.

This story was originally published July 19 by KSHB in Kansas City.