WASHINGTON (AP) — With the House of Representatives racing toward an impeachment vote this week, President Donald Trump will likely become the third president to face a Senate trial to determine whether he should be removed from office.

The examples of Andrew Johnson and Bill Clinton, who were both acquitted, offer insight into the process that Trump would face. Still, much remains unknown about how a trial would proceed on charges that Trump abused his power and obstructed Congress through his efforts to pressure Ukraine to investigate political rival Joe Biden while withholding military aid to the country. Among the unresolved issues are how long a trial would last, how many witnesses would be called, if any, and whether parts of the proceedings would be conducted behind closed doors. Republicans who control the Senate will have a big say over the rules.

A look at what’s known about the impeachment trial:

Once impeachment articles are adopted, the House will appoint members to serve as managers who will prosecute the case. For Clinton’s trial, Republicans on the House Judiciary Committee made the case against the president. One House manager was Lindsey Graham, now a Republican senator from South Carolina who has said he will vote to acquit Trump.

Speaker Nancy Pelosi, D-Calif., could appoint the House team before the week is over. Among her likely choices are Rep. Jerrold Nadler, D-N.Y., the Judiciary Committee chairman, and Rep. Adam Schiff, D-Calif., a former prosecutor who has been leading the impeachment inquiry as House Intelligence Committee chairman. Freshman Democrats in the House also are urging Pelosi to appoint Republican-turned-independent Rep. Justin Amash of Michigan, a vocal Trump critic.

In 1999, the House managers walked silently ac ross the Capitol to the Senate, where the sergeant-at-arms escorted them to the well of the chamber, and Rep. Henry Hyde, R-Ill., then the House Judiciary Committee chairman, read the impeachment articles aloud. When he finished, Hyde said, “That concludes the exposition of the articles of impeachment against William Jefferson Clinton. The managers request that the Senate take order for the trial.”

After impeachment articles are read, Supreme Court Chief Justice John Roberts would be sworn in to preside over the trial. Roberts in turn would swear in the 100 senators who will promise to “do impartial justice according to the Constitution and laws.”

MUST THERE BE A TRIAL?

The Constitution gives the Senate “the sole power to try all impeachments.” Senate rules are clear that whenever the House votes to impeach, the Senate must hold a trial. Senate Majority Leader Mitch McConnell of Kentucky has said the Senate will hold a trial if the House impeaches Trump. 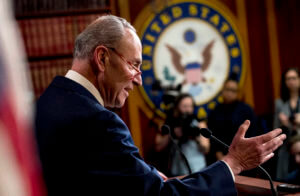 The Senate has rules for impeachment trials, but some key questions, such as the length of the proceeding, must be worked out. There may be strong incentives for McConnell and Sen. Chuck Schumer of New York, the Democratic leader, to agree on as many issues as possible.

Their predecessors as leaders, Republican Trent Lott of Mississippi and Democrat Tom Daschle of South Dakota, agreed on a basic outline before Clinton’s trial began, deferring more difficult issues, including witnesses, until later.

McConnell might favor as short a trial as possible since he has said he sees no chance that Trump could be convicted. Five Democratic senators are running for president, and they may prefer to be elsewhere in January, like the early voting states of Iowa or New Hampshire.

Some Republicans have talked about calling Joe Biden’s son Hunter and other witnesses whom Democrats refused to summon in the House proceedings, portending a longer trial. Trump has accused the Bidens of engaging in corrupt dealings when Hunter Biden accepted a lucrative position with a Ukrainian energy firm while his father handled U.S.-Ukraine relations as vice president.

WERE THERE WITNESSES IN PREVIOUS IMPEACHMENTS?

This was among the most contentious disputes during Clinton’s trial.

When it came to a Senate vote in January 1999, there was a stark partisan division, with majority Republicans providing all the votes to issue subpoenas to former White House intern Monica Lewinsky, Clinton confidant Vernon Jordan and White House aide Sidney Blumenthal. They were questioned in private, with videotaped excerpts played during Clinton’s trial.

Despite the party-line vote, the outcome was the product of long negotiations. The House Republicans who served as trial prosecutors wanted more witnesses and public testimony. But the sexual relationship underlying Clinton’s impeachment may have made senators wary of tawdry public testimony.

By comparison, 40 witnesses testified in public at Johnson’s trial.

Yes, but that would be unprecedented. Senate rules call on the person impeached, or a representative, to answer the charges. The Clinton legal team that handled those tasks in 1999 included his top White House lawyers, but also Dale Bumpers, a former Democratic senator from Arkansas who was at ease in the chamber in which he served for nearly a quarter-century. White House counsel Pat Cipollone appears to be coordinating Trump’s defense.

HOW WILL THE TRIAL WORK?

In some respects, a Senate impeachment trial resembles a typical courtroom proceeding with a judge presiding and an unusually large jury of 100 senators. But there are important differences.

For one, it takes a vote of two-thirds of those present (67 out of 100 if everyone is there) to convict and remove the president from office. For another, while senators determine the outcome, they also set the rules for the trial, may ask questions and can be witnesses.

While courtroom jurors are screened for possible biases, voters already have selected the jury in elections that gave Republicans a Senate majority, with 53 seats. The GOP could insist on rules benefiting Trump, including limiting witnesses, though it would take just three Republicans to foil a party-line effort.

Even if all Democrats vote to convict Trump, the Democratic House managers still need to win over more than one-third of Republican senators for a conviction — a formidable task. By comparison, in the Clinton trial, Republican managers couldn’t win over a single Democrat and several Republicans voted to acquit.

To make their case, the managers are likely to give opening and closing arguments that could last for several days and respond to senators’ questions that also could be time-consuming. They also might question any witnesses. Trump’s defense team would have equal time to rebut the charges. Each step, as well as the time it takes to reach agreement on the rules, takes days, if not weeks.

A simple majority of the Senate could vote to end the trial quickly. This is yet another topic that could be hashed out in negotiations.

Republicans might want to bring the trial to a quick end, but several GOP senators from swing states are committed to a full, fair trial and may want to avoid any appearance of partisanship or taking sides on behalf of Trump.

In Clinton’s trial, Lott and Daschle allowed Democratic Sen. Robert Byrd of West Virginia to move for dismissal a couple of weeks after the proceedings began, but his motion failed basically along party lines.

Roberts would decide questions of evidence and procedure that are not spelled out in Senate rules. That means he could, in theory, allow the House Democrats serving as prosecutors to call the witnesses they want. Some lawyers suggest this could allow Democrats to bypass White House impediments to getting testimony from high-level administration officials.

But unlike in a courtroom where the judge’s ruling is final, the Senate can override Roberts’ decisions by a majority vote. The chief justice also might avoid injecting himself into the proceedings by using the escape clause he is given in the standing rules: Roberts can “submit any such question to a vote of the Members of the Senate.”

Roberts would be the third chief justice to preside at a Senate impeachment trial, joining Salmon P. Chase, who oversaw Johnson’s trial in 1868, and William Rehnquist, who presided at Clinton’s trial in 1999.

Rehnquist, for whom Roberts once worked, stayed above the political fray. There’s no reason to think Roberts would approach his role differently.

Rehnquist balanced his job at the court with his duties across the street at the Capitol, though the court was not in session for most of Clinton’s trial. On one day, when the court heard arguments and the trial was in session, Rehnquist ducked out about 10 minutes early during arguments over electoral districts in North Carolina.

Eventually, senators will deliberate. Whether that’s done in private is up to them.

In 1999, the Senate defeated a Democratic effort to open up deliberations. Once a decision has been reached, the Senate meets in open session to vote on each article of impeachment. Senators will stand one by one at their desks and offer their verdict, guilty or not guilty.

Twenty years ago, Republican House members could not persuade any Democratic senators to convict Clinton, and they lost five Republican votes on one impeachment article and 10 on the other. Democrats have an equally tall order this time. To convict Trump, they need to draw 20 Republican senators, assuming all 45 Democrats and two Democratic-allied independents vote against the president.

If Trump is not convicted, the trial ends and he remains in office.

But if he is convicted, the country would enter an unprecedented situation. Trump would be automatically removed from office, and Vice President Mike Pence would become president. It’s not clear how quickly the succession would happen, but the Constitution does not contemplate any gap between a Senate vote to convict and the new president assuming power. “In the case of the removal of the President from office or of his death or resignation, the Vice President shall become President,” the 25th Amendment says.