NEW YORK (AP) — A 26-year-old woman was arrested Tuesday in the death of a 87-year-old Broadway singing coach who was shoved to the ground on a New York City street.

Lauren Pazienza, of Port Jefferson, Long Island, turned herself in to face a manslaughter charge in the death of Barbara Maier Gustern, which police said was the result of “an unprovoked, senseless attack.” 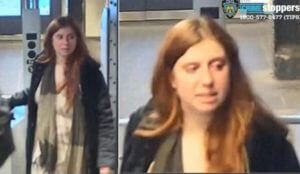 Gustern hit her head and was critically injured March 10 when a woman crossed the street, came up behind her and pushed her to the ground on West 23rd Street in Manhattan’s Chelsea neighborhood. She died March 15.

Online court records did not list a lawyer who could speak on Pazienza’s behalf. Information about her arraignment was not immediately available.

Friends told The New York Times that Gustern had just left her apartment to catch a student’s performance after hosting a rehearsal for a cabaret show in her apartment.

Gustern had been known in the theater world for decades.

She worked with singers ranging from the cast members of the 2019 Broadway revival of the musical “Oklahoma!” to experimental theater artist and 2017 MacArthur “genius grant” recipient Taylor Mac, who told the Times she was “one of the great humans that I’ve encountered.”

Her late husband, Joe Gustern, was also a singer, with credits including “The Phantom of the Opera” on Broadway.