AURORA, Colo. (KMGH) — Police arrested a 37-year-old woman on murder and arson charges in connection with a Monday morning fire that killed a 5-year-old boy at at an apartment complex in Aurora, Colorado.

The suspect, Alondra Michel, was arrested Monday afternoon following interviews with numerous witnesses, and by examining physical evidence from the scene of the fire that also injured nine people and damaged 12 units, displacing 31 residents at the Bella Terra at City Center Apartment Homes, according to the Aurora Police Department. 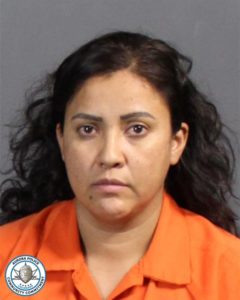 Police said Alondra was involved in a domestic violence incident with a resident on the main level of the apartment building and allegedly set something inside of the apartment on fire, which quickly spread to adjacent units, including the second-story apartment where the 5-year-old boy was found.

Calls first started coming in about the fire at the three-story multifamily apartment building, located at 15400 E. Evans Ave., around 1:30 a.m., according to Aurora Fire Rescue. The fire was under control by about 2:30 a.m.

Multiple people had to be rescued. Medics evaluated nine patients, and three had to be taken to hospitals. Among the three transported was the 5-year-old boy, who was later pronounced deceased at the hospital.

Details on the severity of the injuries of the other two hospitalized patients have not been released. Six other patients refused care at the scene.

No further details on the death, including the boy’s identity, were immediately available. Detectives from the Aurora Police Department’s Major Crimes Unit are handling what they are calling a homicide investigation.

Crews on scene of a 2nd Alarm fire in a 3 story multifamily apartment building in the 15300 block of E. Evans Ave. pic.twitter.com/Ax1PP1uVfR

Jazmine Murray, a Bella Terra resident whose unit is close to where the fire started, was awoken by the smell of smoke and banging on her door. 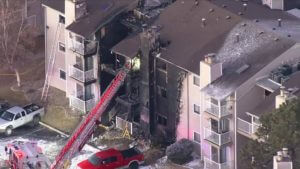 Police investigating a fatal apartment fire in Aurora arrested 37-year-old Alondra Michel on suspicion of first-degree murder, alleging she intentionally started the fire which killed a 5-year-old boy and injured eight others. The blaze displaced 31 residents from their apartments. (Denver 7)

Aurora Fire Rescue said there was a “significant overhaul underway” and that stairwells on both sides of the apartment building had failed. In a later update, investigators confirmed there was heavy fire involvement in the stairwells that spanned over the three levels of the apartment, which caused some stair collapses.

Murray said she heard a woman screaming for her child and saw firefighters frantically trying to save the 5-year-old boy as they took him away in a stretcher.

“I don’t think you really can process that because it literally went from zero to 100 in seconds, and just seeing him lifeless on that stretcher, not knowing,” Murray said. “How do you process that for the mom? Like, what do you say? You can’t say anything.”

Five disaster action team volunteers responded to the scene to provide immediate assistance like blankets and water, and the Red Cross is also responding to mental health and other health services.

The Red Cross says in addition to the 12 damaged apartments, the fire left 12 other apartments without utility service. There’s no word on when residents may be able to return.

This story was originally published Jan. 24, 2022 by KMGH in Denver, an E.W. Scripps Company.