The officer was shot when KCI police responded to reports of a suspicious vehicle in an economy parking lot in the early hours of Friday, Dec. 16. 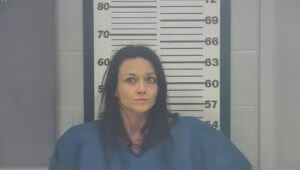 Lacy Perry, 34, along with Kevin Bloom, 40, was arrested and charged after a short chase near the airport.

The truck that Bloom and Perry were in eventually crashed near Bern Street and Cookingham Drive, and they were both taken into custody.

After being placed in handcuffs, Perry was left unattended near the east side of the crash site while Bloom’s handcuffs were double locked, according to court documents.

Shortly after, a responding officer observed Perry in the driver seat of a KCI police cruiser.

Perry began driving the police car in reverse and was later heard telling Bloom to escape custody and to get inside the KCI cruiser.

While trying to get Perry out of the vehicle, one of the responding KCI officers was shot. He suffered non-life-threatening injuries.

Perry is charged with tampering with a motor vehicle and resisting arrest/detention/stop by fleeing and disarming a peace officer or correctional officer.

This story was originally published Dec. 20 by KSHB in Kansas City, an E.W. Scripps Company.