DALZELL, S.C. (AP) — A 67-year-old South Carolina woman and her daughter face charges of assault after a dispute over bullying at a middle school, police said.

Mamie Smith and her daughter, Whitley Smith, 37, both of Sumter, were charged Wednesday with third-degree assault by mob and disturbing schools, the Sumter County Sheriff’s Office said in a news release. 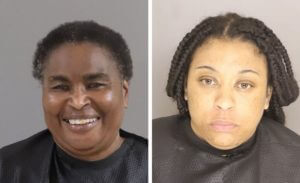 L to R: 67-year-old Mamie Smith and 32-year-old Whitney Smith. The mother and daughter are both charged with assault by mob and disturbing schools. (Photo: Sumter County Sheriff’s Office)

The women went to Ebenezer Middle School in Dalzell to confront a child they accused of bullying a family member, Sheriff Anthony Dennis said.

“This type of behavior is criminal and should never be considered as the appropriate way to deal with matters. It is my understanding that these two subjects were responding to the school because they believed their family member was being bullied,” Dennis said.

The sheriff added that the students were “viciously attacked”” yet an investigation showed they were not even the students who the Smiths believed had bullied their family member.

Investigators said the Smiths went to the school, buzzed the front door for entry and told the school staff they needed to go to the attendance office. Once inside the building, the women ran down the hall, confronted a student, pushed the child against a wall and then hit and scratched her in the face and head, the sheriff’s office said.

Another student in the hallway also was pushed and hit, and a third student also was assaulted before the school resource officer and staff were able to detain the women, the sheriff’s office said.

“We work very hard to protect all students in our schools,” Dennis said. “The fact is, the students who were reported as bullying these subjects’ family member was actually in the office being dealt with when this attack took place.”

One child was taken to an area hospital for medical treatment, according to the release. The two other students were released to their parents. Further information on the children’s conditions was not available.

Bond for both women was set at $10,000. It was unknown if either has an attorney who could speak for them.

If convicted on the assault charge, each woman faces a maximum sentence of a year in prison, while a conviction on the misdemeanor charge of disturbing schools is punishable by a maximum of 90 days in jail and a $1,000 fine, according to South Carolina law.