JUNEAU, Wis. (AP) — A Milwaukee woman has pleaded guilty to concealing the death of her newborn baby almost 13 years ago.

The Beaver Dam Daily Citizen reported that 45-year-old Karin Luttinen pleaded guilty Monday to a felony count of concealing the death of a child in Dodge County Circuit Court in a deal with prosecutors. She faces up to a year and a half in prison when she’s sentenced Aug. 5. 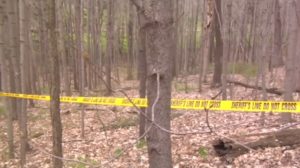 Karin Luttinen has pleaded guilty to concealing the death of her newborn baby almost 13 years ago. (WTMJ)

According to a criminal complaint, Luttinen gave birth to the baby girl in a bath tub in April 2009. The umbilical cord was wrapped around the newborn’s neck, she said. She blacked out and woke up in a panic.

She put the baby in a trash bag and left it in the woods outside of the town of Theresa. A wood cutter found it later that month. An autopsy showed the child may have died prior to or shortly after birth.

The case languished for years. Prosecutors developed a DNA profile of the baby’s mother using a maxi pad wrapper that was in the trash bag with the baby’s body and in 2014 charged that profile as a Jane Doe to keep the statute of limitations from expiring.

Analysts finally used a genetic analysis of the profile’s family tree to key in on Luttinen. Investigators obtained a DNA sample from her in January and determined last month that she was a major source of the DNA on the maxi pad wrapper and that she was the baby’s mother.