VIRGINIA BEACH, Va. (WTKR) – One last hug, that’s all he said he wanted.

“He had called over and over and he was pulling on my heartstrings and manipulating me,” said Melissa Dohme Hill.

On January 24, 2012 in Clearwater, Florida, Melissa was just 20 years old. She had a bright future studying as a nurse, and had broken up with her longtime boyfriend three months prior. He wanted closure, so she gave in.

“He reached around me for the hug, and he went to squeeze me I heard a click and it was the switchblade flipping open that he was hiding in his hand,” she said.

“He first stabbed me in [the] shoulder then neck and then side of my face and that was beginning of a fight with my life,” she said.

Melissa said she screamed, wailed, and ran for help and landed in the road in front of her home.

“It is really gruesome but that is when my mouth filled with blood and I knew ‘this man is here to kill me’ and everything in life came flashing in that moment,” said Melissa.

The brutal attack was just beginning as the ex-boyfriend would go on to stab her 29 more times with a larger knife and left her in a pool of blood, lifeless.

Two teenagers at a nearby park answered her prayers. “My ex was straddling me in the road and stabbing me and his knees were on each side of me, a young man pulled him off of me and the girl was on the phone with 911 the whole time, I believe these are my angels,” she said.

Melissa was found by police on patrol and was rushed to an ICU. “I said my final prayer and I thought this is it,” she said.

Trauma surgeons worked on her for five hours and she flat-lined four times and had a stroke, the blood loss was becoming to much, but Melissa fought hard.

“When I woke up, I couldn’t believe it, I was touching myself and I was like I am alive,” she said.” I was grateful my mom was right there, she said I love you, squeeze my hand if you know its me.”

Melissa’s life was not supposed to end that day, she had a higher calling.

“I remember the trauma surgeon standing at my bed and said this girl is an absolute miracle this never happens,” she explained. 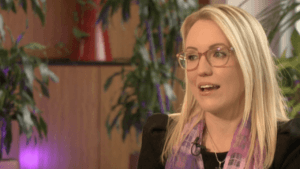 12 years later she’s a SUR-THRIVER. After multiple reconstructive surgeries she developed the conviction to be an advocate and speak out against domestic violence. Recently, she was the keynote speaker for the Samaritan House at their Women Against Violence luncheon.

“I can heal and I can be strong and I can speak, but I can’t take the pain it caused my family so that is why it’s my passion to speak about dating and domestic violence because its so important,” she said.

Since 2013, Melissa has proudly worked for a non-profit in Florida called Hands Across the Bay as Director of Family Services and Domestic Violence Prevention.

If you or someone you know needs help with a domestic violence situation click here.

This story was originally published October 8, 2021, by WTKR in Norfolk, an E.W. Scripps Company.