HARTFORD, Conn. (AP) — Yale University is accused in a federal lawsuit filed Wednesday of discriminating against students with mental health disabilities, including pressuring some to withdraw from the prestigious institution and then placing “unreasonable burdens” on those who seek to be reinstated.

The lawsuit filed in U.S. District Court in Connecticut on behalf of current and former students seeks no monetary damages. Rather, it demands changes to Yale’s withdrawal policies, including the required forfeiture of health insurance and tuition payments, among other rules. 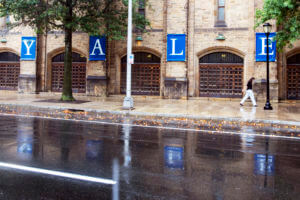 FILE – A woman walks by a Yale sign reflected in the rainwater in the street on the Yale University campus in New Haven, Conn., Aug. 22, 2021. Yale University is being accused in a federal lawsuit filed Wednesday, Nov. 30, 2022, of discriminating against students with mental health disabilities, including pressuring some to withdraw from the prestigious institution and then placing “unreasonable burdens” on those who seek to be reinstated. (AP Photo/Ted Shaffrey, File)

“Yale’s withdrawal policies and practices push students with mental health disabilities out of Yale, impose punitive consequences on students who have withdrawn, and place unreasonable burdens on students who, after a withdrawal, seek reinstatement,” according to the suit, which contends that the burden is most harsh on students “from less privileged backgrounds.”

The plaintiffs contend that Yale needs to implement a process for handling students with mental health needs that’s more accommodating for individuals.

“Each person is different and their mental health disability will affect them differently,” said Deborah Dorfman, an attorney and executive director of Disability Rights Connecticut, one of three groups that filed the lawsuit. “We’re really advocating here for individual assessments of each student’s situation and also full consideration of all of the possible reasonable accommodations that might work for the student.”

Yale didn’t immediately reply to a message seeking comment. In a Nov. 16 letter to alumni in response to a Washington Post article about student mental health and Yale’s withdrawal and readmission policies, President Peter Salovey said the “health and well-being of Yale students are primary university priorities.”

Salovey said colleges and universities in the last few years have seen a surge in demand for mental health services that was exacerbated by the pandemic. He said Yale has since made a “substantial change” to its reinstatement policy by dropping the requirement that students who have withdrawn from Yale must take two courses at another school before they could seek readmission.

“We also simplified the process for students in other ways, including dropping an informational interview with the chair of the reinstatement committee, which students told us could be intimidating,” wrote Salvoney, who noted other changes, including adding more mental health support services for students.

The plaintiffs, however, say more needs to be done.

“The current state of things still leaves students with a very stark binary when they’re struggling. They either have to commit to a full-time schedule, or they commit to an extended absence in which they lose university health insurance, campus housing, institutional support,” said Rishi Mirchandani, a 2019 Yale graduate and co-founder of Elis for Rachael, a group founded 2021 in honor of a Yale student who took her own life and that helps Yale students struggling with mental health issues.

The lawsuit alleges that past and present students who sought mental health treatments were told it would not “look good” if they resisted taking a voluntary withdrawal from the school, which is different from a leave of absence.

One plaintiff, international student Hannah Neves, recalled being visited at the hospital by three Yale officials after her 2020 suicide attempt and being encouraged to take a withdrawal despite her reluctance, according to the lawsuit. When she was discharged from the hospital, she saw an email from four or five days earlier stating that she had been involuntarily withdrawn from Yale and had 72 hours to leave the campus. She said she could not return to her dorm room unless accompanied by a Yale police officer and could only say goodbye to friends off-campus.

Another plaintiff, current student Alicia Abramson, told The Associated Press that she did not feel pressured to voluntarily withdraw. However, she said she felt Yale put up numerous barriers that made it hard for the third-year student to be reinstated, including the now-defunct requirement to take two classes elsewhere.

“I don’t want other people to have to go through the same process that I did because it’s certainly not conducive to any kind of healing,” said Abramson, who feels Yale treats students’ mental health needs as “something to be punished and disciplined” rather than offering them care and support.

Yale, she said, “tends to view students with mental health issues as liabilities in a way that I feel like they don’t with people with more physical disabilities.”

The lawsuit seeks certification to be a class action, ultimately representing more than 1,300 current students as well as alumni.