HEBRON, Ky. (WCPO) — A 14-year-old boy was arrested after he made threats against Conner High School, the Boone County, Kentucky Sheriff’s Office said in a press release. 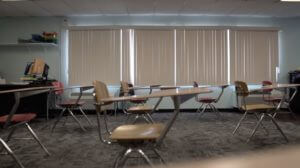 On Tuesday, October 18, at around 9:30 p.m., the Boone County Sheriff’s Office says deputies received two separate reports after screenshots of a threat from a Conner High student began circulating on a “social media chat application.”

Deputies went to the student’s home where they say he confessed to making the threats during a conversation with a friend and they took him into custody.

They said the threats “vaguely mentioned” a school shooting, but also said that the student was going to be “bringing a knife to school” to kill his teacher.

The teen is charged with terroristic threatening 2nd degree. He is being held at the Campbell County Juvenile Detention Center. His identity was not released due to his age.

This story was originally published Oct. 19, 2022 by WCPO in Cincinnati, an E.W. Scripps Company.