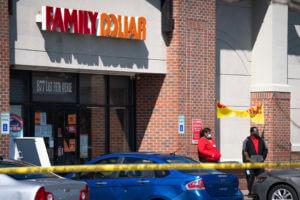 In this Friday, May 1, 2020 photo, employees stand outside the Family Dollar as police investigate a shooting that took place at the store in Flint, Mich. (Sarahbeth Maney/The Flint Journal via AP)

FLINT, Mich. (AP) — Two men were arrested Friday in the fatal shooting of a security guard who demanded a woman wear a mask while shopping at a store.

Genesee County authorities said Ramonyea Bishop, 23, was taken into custody at an apartment in Bay City. His alleged accomplice, Larry Teague, 44, was arrested Thursday near a motel in Houston.

The men and Sharmel Teague, the wife of Larry Teague, are charged with first degree murder in the May 1 shooting of Calvin Munerlyn at a Family Dollar store in Flint.

Munerlyn was shot at the store just north of downtown Flint a short time after telling Sharmel Teague’s daughter she had to leave because she lacked a mask, according to Genesee County Prosecutor David Leyton.

Teague argued with Munerlyn, 43, before leaving. Two men later came to the store and allegedly shot the security guard to death..

Bishop’s sister, Brya Bishop, was previously charged with tampering with evidence, lying to police and being an accessory to a felony. Leyton has said she “attempted to shield” family members.

During a news conference, Leyton said two other people, Laura Ann Mitchell, 44, and Terrence Devon Findley, 43, were arrested in Houston and charged with helping Teague flee to Texas and elude police.

Mitchell and Findley rented a car in Michigan, drove Teague to Texas, bought him clothing at a Walmart and rented him a motel room, Leyton said.