BRIDGEPORT, Calif. (AP) — Three people have been arrested in connection with the killings of a married couple found slain last year on a remote stretch of U.S. 395 in the eastern Sierra Nevada, prosecutors said Thursday.

The bodies of William Adrian Larsen, 35, and Yesenia Larsen, 30, were discovered November 9 on the shoulder of the highway by a state snowplow driver clearing the lanes about 10 miles (16 kilometers) north of the tiny community of Bridgeport. The couple lived in Burbank, near Los Angeles. 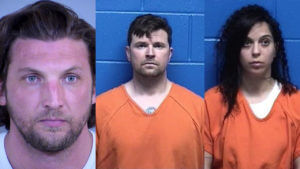 These March 2021 booking photos show Bradley Kohorst (L), Cory Spurlock (C), and Orit Oged (R). The three are suspected in the murders of William Adrian Larsen and Yesenia Larsen, whose bodies were found November 9, 2020, on a remote stretch of U.S. 295 in the eastern Sierra Nevada. (Mono County Sheriff’s Office)

Missoula, Montana residents Bradley Kohorst, Cory Spurlock, and Orit Oged were arrested this week on suspicion of murder and other crimes, the U.S. Department of Justice said in a news release.

Investigators determined that the three defendants “were former business associates of William Larsen, and were allegedly responsible for the murder of the couple,” the news release said.

It wasn’t known if the defendants have attorneys. All three are awaiting extradition to Mono County, California, where the killings took place.

Kohorst was arrested in Phoenix, Arizona on Monday while Spurlock and Oged were arrested Thursday in Missoula.