DENVER (AP) — Three men arrested with more than a dozen weapons and hundreds of rounds of ammunition at a Denver hotel near the site of Major League Baseball’s All-Star Game have been charged with federal firearms crimes, the U.S. Attorney’s Office said Friday.

The number of weapons found May 9 near the event and a request by one of the men for a room with a balcony raised concerns among police of a possible mass shooting but the FBI soon said it had no reason to believe the arrests were connected to terrorism or that there was a threat to the game. 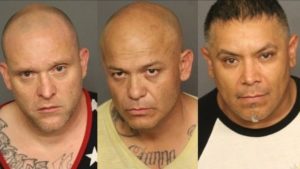 Federal prosecutors reiterated that in announcing that Richard Platt, Ricardo Rodriguez and Gabriel Rodriguez had each been charged with being a felon in possession of a firearm. Each has multiple previous felony convictions, according to court documents.

Gabriel Rodriguez is also charged with possession with intent to distribute methamphetamine.

All three appeared on Friday in federal court in Denver, where Assistant U.S. Attorney Rajiv Mohan asked that they be detained while the cases against them proceed. Hearings were scheduled next week to determine if they will continue to be held.

Attorneys for each of them declined to comment on the allegations after their hearings.

Both Gabriel and Ricardo Rodriguez told Denver media in interviews from jail earlier this week that they did not plan any violence against people gathered for the game or other events associated with it.

“I was trying to get there and sell some dope and get out, and the next thing I know the SWAT team and everybody on me,” Gabriel Rodriguez told KCNC-TV in one interview.

A woman who was also arrested at the hotel, whom Platt said was his girlfriend, according to the affidavits, was not charged in federal court.