FOUNTAIN, CO (KOAA) —  A Colorado woman has been arrested for the sexual assault of a 13-year-old boy.

The Fountain Police Department began an investigation on June 27 into a report of a sexual assault on a 13-year-old.

Serrano was arrested on July 5 after she confirmed the relationship. 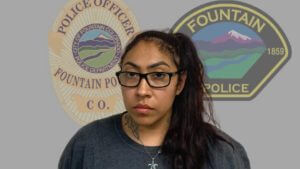 In an affidavit obtained by KOAA News5, Serrano became pregnant after police say she sexually assaulted the 13-year-old.

The document also revealed the victim lived with Serrano for several weeks.

If you have any information about this incident, contact the El Paso County Sheriff’s Office Communications Center at (719) 390-5555.

To remain anonymous, contact Crime Stoppers Tip Line at (719) 634-STOP (7867) or go online. If your information leads to a felony arrest, you could be eligible for a cash reward.

This story was originally published July 11, 2022 by KOAA in Colorado Springs, an E.W. Scripps Company.