AURORA, Colo. (AP) — Authorities are searching for a suspect in an overnight shooting that left four people dead at a home in suburban Denver. 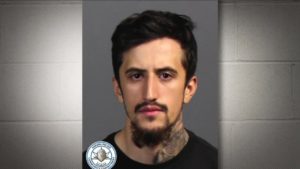 Dan Oates, Aurora’s interim police chief, said three men and one woman were killed in the attack just after 2 a.m. Sunday. Two “very young” children and a woman who is the suspect’s domestic partner were unharmed.

A restraining order had been issued earlier in the week barring the suspect, 21-year-old Joseph Mario Castorena, from coming to the home or contacting his domestic partner, who lived there. Police searched Castorena’s home a few blocks away from the site of the slayings but did not find him.

“This was an accumulation of events here that led to this,” Oates said.

Police used drones to search for Castorena at sunrise and were looking for him in the immediate neighborhood Sunday.