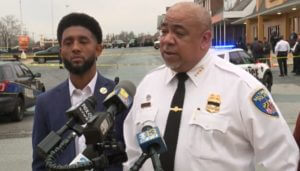 Commissioner Michael Harrison said two unidentified shooters opened fire on the group as they were gathered during their lunch break, outside the restaurant across from Edmondson West Side High School.

One victim, age 16, died of their injuries. The others, each of whom are between 17 and 18 are currently hospitalized.

Although detectives do not believe the shooting was connected to any school related confrontation, the building was placed on lockdown.

“People are dying over stupid stuff. People are dying because oh someone left me and now they have a new boyfriend and I seen a picture of them on Instagram,” said Mayor Brandon Scott. “No one should die over that, we should be able to resolve our conflict in a different way, we shouldn’t be so weak that when we have a basic dispute we’re going to take someone’s life or pull out a gun because we feel disrespected.”

Recently there have been calls to renovate the shopping center as ongoing complaints of crime persist.

Harrison said a patrol officer had checked on the location just a few minutes before shots rang out. 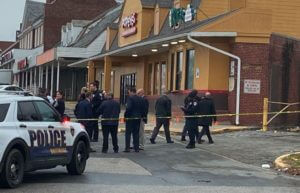 The crime scene of a deadly shooting outside the Popeyes at Edmondson Village Shopping Center in Baltimore on January 4, 2023. (WMAR)

Scott added that the Popeyes had been cited in the past for serving students during school hours.

“The businesses have to be partners,” said Councilman Kristerfer Burnett. “You go in any of these businesses you’ll see that there are signs in the window saying don’t serve young people, and they just refuse to stop.”

The tragic incident happened just a couple hours after two other shootings left three people injured in Baltimore within one minute of each other.

Right now police have no potential motive or leads on the suspects. They’re asking anyone with information to call 410-396-2100.

This story was originally published Jan. 4, 2023 by WMAR in Baltimore, an E.W. Scripps Company.