The proceedings in state court came six days after two men who were described as leaders of the scheme were convicted in federal court. 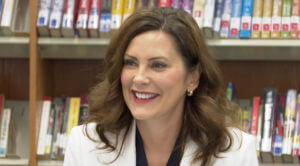 In this image made from video, Michigan Gov. Gretchen Whitmer speaks with educators, parents and students during a back-to-school event at Novi High School on Wednesday, Aug. 24, 2022, in Novi, Mich. A day earlier, two men were convicted of conspiring to kidnap Whitmer. (AP Photo/Mike Householder)

Michael Null, William Null, Eric Molitor and Shawn Fix, all from Michigan, are each charged with providing material support for terrorist acts as well as a gun crime. Brian Higgins of Wisconsin Dells, Wisconsin, faces the same material support charge.

Judge Michael Stepka must decide if there is probable cause to send the men to trial in Antrim County, a low bar at this stage of the case. The county is the location of Whitmer’s Elk Rapids vacation home.

Fourteen people — six in federal court, eight in state courts — were arrested in 2020 and charged in relation to the kidnapping plot.

Federal authorities said there was support to abduct Whitmer and spark a civil war, known as the “boogaloo,” before the 2020 election.

The Null brothers, Higgins and Molitor participated in trips to see Whitmer’s home, according to evidence.

In federal court, Adam Fox and Barry Croft Jr. were convicted of conspiracy on Aug. 23. Ty Garbin and Kaleb Franks earlier pleaded guilty, while Daniel Harris and Brandon Caserta were acquitted at trial in April.