ST. PAUL, Minn. (AP) — Eight minority corrections officers who were working at the jail where a former Minneapolis police officer was awaiting trial in the death of George Floyd were awarded nearly $1.5 million Tuesday to settle a lawsuit.

The officers filed the racial discrimination complaint after a Ramsey County Jail superintendent barred officers of color from entering the floor where Derek Chauvin was being held. The settlement also calls for the county to apologize in a written statement and acknowledge that order was discriminatory and wrong. 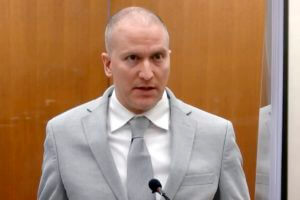 FILE In this June 25, 2021, file image taken from video, former Minneapolis police Officer Derek Chauvin addresses the court at the Hennepin County Courthouse in Minneapolis. Former Minneapolis police Officer Thomas Lane is hoping for a sentence Thursday, July 21, 2022, that could let him go free after as little as two years in prison for his role in the killing of George Floyd. Lane is one of three former Minneapolis officers, along with Alexander Kueng, Tou Thao and Chauvin, who were convicted by a federal jury in February of violating Floyd’s civil rights by depriving him of medical care. (Court TV via AP, Pool, File)

Floyd died in May 2020 after Chauvin, who is white, used his knee to pin down the handcuffed Black man’s neck even after Floyd stopped moving and pleading for air. The incident led to worldwide protests and violent demonstrations in Minnesota and elsewhere.

Steve Lydon, the jail superintendent, allegedly told superiors that he was informed that day that Chauvin would be arriving in 10 minutes and he made a call “to protect and support” minority employees by shielding them from Chauvin. Lydon was later demoted.

Board Chairwoman Trista MatasCastillo apologized in a statement and said the decisions by leaders in the sheriff’s department, which runs the jail, was “more than just wrong — they were racist, heinous, highly disrespectful and completely out of line with Ramsey County’s vision and values.”

The eight plaintiffs said they hope jail managers will work toward meaningful changes that create a safe and welcoming working environment.