Father and son Greg and Travis McMichael and a neighbor, William “Roddie” Bryan, are charged with murder and other crimes in the 25-year-old Black man’s death after a cellphone video of the Feb. 23, 2020, killing was leaked online two months later.

“We can’t do this without you,” Superior Court Judge Timothy Walmsley told the eight pool members, the first to advance after being questioned individually by attorneys on what they know about Arbery’s death, how many times they watched the video and whether they think the shooting was motivated by racism.

Dozens more in the jury pool will need to be cleared before a final panel of 12 jurors and four alternates can be seated. Tuesday marked the second day of jury selection, which court officials say could take more than two weeks before the actual trial can begin. 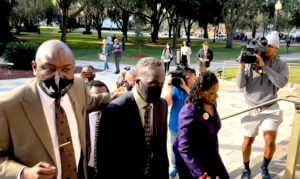 Ahmaud Arbery’s father Marcus Arbery, center, heads into the Glynn County Courthouse in Brunswick, Ga with his attorney Benjamin Crump on Monday, Oct. 18, 2021. Jury selection got underway with hundreds of people ordered to report for what could be a long, laborious effort to find jurors to hear the trial of three white men charged with fatally shooting Ahmaud Arbery as he was running in their neighborhood. (AP Photo/Lewis M. Levine)

Jury duty notices were mailed to 1,000 people in coastal Glynn County, with 600 ordered to report Monday and the remainder on deck for next week if needed.

The huge jury pool underscores how Arbery’s slaying has dominated the news, social media feeds and workplace chatter in the coastal community of roughly 85,000 residents.

The eight people deemed qualified to serve won’t necessarily be seated on the final jury. They just weren’t among those found to have hardened opinions on the case, or with hardships that made jury service an unfair burden. Prosecutors and the defense will take turns striking qualified pool members in order to arrive at the final jury.

Two of those qualified Tuesday said they know some of the defendants. One said his father is a longtime prosecutor who worked with Greg McMichael before the defendant retired as an investigator for the local district attorney shortly before Arbery was killed.

“He’s a friend of my father’s and he’s been over to our house multiple times,” the man said.

The other said her husband and father-in-law know Bryan.

A woman who said she knows Arbery’s father, Marcus Arbery Sr., was dismissed.

The judge expressed frustration over the slow pace. His initial schedule had called for attorneys to question two groups of potential jurors of 20 people each. But he sent the second group home Tuesday afternoon, with more than half of the morning panel still waiting to be questioned.

“I do not have the ability to just store people or keep them longer than planned,” the judge said, adding later: “At the rate we’re going, all these plans we have to move these panels through are not going to work.”

Prosecutors say Arbery was merely jogging on the street 2 miles (3.2 kilometers) from his home when the McMichaels grabbed guns and chased him in a pickup truck. Bryan joined the pursuit in his own truck and recorded the now-infamous cellphone video of Travis McMichael shooting Arbery three times at close range with a shotgun.

Prosecutors say there is no evidence that Arbery, who was unarmed, committed any crime.