A missing 4-year-old Oklahoma girl was beaten to death Christmas night by her caregiver, then buried, according to court documents released Tuesday.

Athena Brownfield has been missing since Jan. 10 when a postal carrier discovered her 5-year-old sister alone outside the home the girls shared with the caregivers, Ivon Adams and Alysia Adams, in Cyril, about 70 miles (113 kilometers) southwest of Oklahoma City. 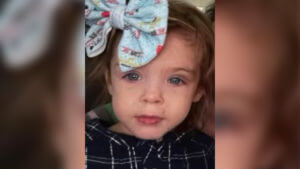 The search for the child is now a “recovery operation,” the Oklahoma State Bureau of Investigation said Monday.

An affidavit says Alysia Adams told investigators that her husband beat the child at about midnight Dec. 25.

Athena “was not moving and her eyes were barely open” Alysia Adams said, according to the affidavit by OSBI Lt. Brenna Alvarez. Ivon Adams “then laid her on the ground and punched her at least three more times in the chest” and the child “never moved after that.”

Ivon Adams left the home with Athena at about 1 a.m. Dec. 26 and later returned, saying he buried her body on land the Adams once owned close to the nearby town of Rush Springs, about 15 miles (24 kilometers) southeast of Cyril, marking the site with “a large broken branch.” 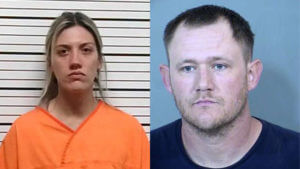 Authorities have been searching that area. An OSBI spokesperson did not immediately return phone calls and texts from The Associated Press on Tuesday.

Court documents do not list attorneys who could speak on the behalf of either of the Adams.

Brandon Bryant, who said he and his wife were once neighbors of the Adams, said Tuesday that he had little interaction with the couple, but saw nothing unusual from them. 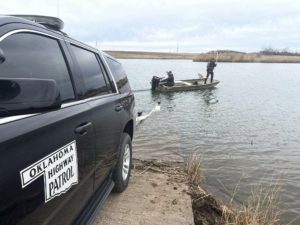 In this image provided by the Oklahoma Highway Patrol, troopers search a pond near Cyril, Okla, on Wednesday, Jan. 11, 2023, for Athena Brownfield, a 4-year-old girl missing since Tuesday, Jan, 10. Authorities have arrested two people in connection with the girl’s disappearance while they continued searching for her Friday, Jan 13, 2023. (Trooper Eric Foster/Oklahoma Highway Patrol via AP)

“Didn’t see anything out of the normal. We talked to Alysia a few times, Ivon never,” Bryant said. “We never went into their house, Alysia came over to our house a few times … we gave her a car seat.”

Bryant, whose children are 5 and 10 years old, said he still considers Cyril, with a population of about 800, a safe place.

“Its a small town, it’s probably one of the few places on earth I would consider leaving my doors unlocked at night … it’s still a good place to live,” Bryant said.

The OSBI has said the girls and the Adams’ are related and the affidavit said that the children’s biological mother had left them with the couple 1 1/2 to 2 years ago with the girls calling Alysia “mom” or “Aly” and Ivon “dad” or “Uncle Ivon.”

The children’s biological mother and father are cooperating with investigators, according to the OSBI.