A three-judge panel of the 10th U.S. Circuit Court of Appeals in Denver denied the inmates’ motion in a ruling on Monday. The decision paves the way for the state to carry out the executions of Donald Grant, 46, on Thursday and Gilbert Postelle, 35, on Feb. 17. 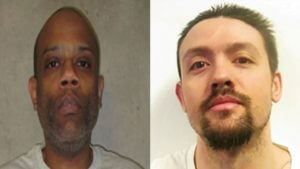 Inmates Donald Grant (L) and Gilbert Postelle (R) requested a temporary injunction that would delay their upcoming executions until a trial can be held over whether Oklahoma’s 3-drug method of lethal injection is constitutional. (Oklahoma Dept. of Corrections)

The two have argued that the state’s current three-drug lethal injection protocol that uses midazolam as the first drug will expose them to a constitutionally unacceptable risk of severe pain. But after a daylong hearing on that issue earlier this month, a federal judge in Oklahoma City determined the inmates were unlikely to succeed on the merits of their case and denied their request for a temporary stay of execution.

The judge also determined that Grant and Postelle selected an alternative method of execution, firing squad, too late to be included in a separate lawsuit challenging Oklahoma’s lethal injection protocol as unconstitutional.

Attorneys for the two inmates filed an appeal Tuesday with the U.S. Supreme Court, urging the high court to grant them a temporary stay of execution.

“The public will be ill-served if applicants are executed before a full opportunity to test the protocol’s legality,” attorneys wrote in the application for a stay.

Grant was convicted and sentenced to die for killing two Del City hotel workers during a 2001 robbery. Postelle received the death penalty for his role in the Memorial Day 2005 shooting deaths of four people at a home in southeast Oklahoma City.