TEMPE, Ariz. (KNXV) — A man shot and killed his wife after police say he was startled by her in the middle of the night Friday.

Officials responded to a call for reports of a shooting near Mill Avenue and Apache Boulevard where they found 25-year-old Colleen Hoopes inside a home with a gunshot wound. 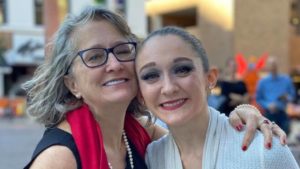 She was taken to the hospital where she was later declared deceased.

Colleen Hoopes worked at Ballet Arizona, partially as a teacher, according to Colleen’s mother Deb Buckley.

Ballet Arizona released a statement saying, “We are heartbroken to learn of the passing of Company Dancer, Colleen Hoopes. Colleen was an integral part of Ballet Arizona family and will be missed deeply. She was passionate and dedicated to her artform and a bright light to us all. Our hearts go out to her loved ones.”

This is an ongoing investigation.

This story was originally published May 24 by KNXV in Phoenix, an E.W. Scripps Company.