NEW ORLEANS (AP) — More than five years after a St. Louis man visiting New Orleans to plan his wedding was shot and left to die in an armed robbery, a suspect has been arrested and charged, authorities announced Thursday.

Ernest Weatherspoon, 44, was detained in Jefferson Parish on Thursday morning, a day after he was indicted by a New Orleans grand jury, said District Attorney Jason Williams. He has been charged with the second-degree murder and armed robbery of Thomas Rolfes, 25. 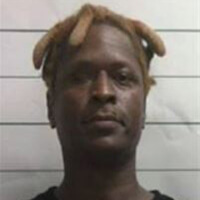 Williams credited his staff, police and victim advocates with continuing to pursue the cold case until evidence led to charges and an arrest. “Because they never gave up in trying to find the killer of young Thomas, new evidence was unearthed,” Williams said at a news conference. He didn’t elaborate on what the evidence was but said it was the result of “community members” coming forward with information.

“I spoke to Thomas’ parents last night. And I just got off the phone with his then-fiancée,” Williams said. “They were all very emotional to finally get this measure of closure. This has not been easy on this family. It’s not easy on any family.”

Rolfes was a Tulane University graduate who had come back to the city on a Mother’s Day weekend to meet with his fiancée and scout wedding venues.

He was found shot to death at an intersection after leaving a bar.

Rolfes’ body was found early on the morning of May 7, 2016. Surveillance video showed Rolfes entering a convenience store alone around 3:30 a.m., buying two bottles of water and then leaving. He earlier had been with friends at a bar nearly 2 miles (3 kilometers) away.

Williams, who ran for district attorney as a reformer last year, said solving the cold case was aided by his decision to change the office’s priorities: focusing on violent crime and “not wasting our precious womanpower and manpower going after every marijuana joint in the city, going after every simple possession of cocaine case.”

There was no record of Weatherspoon having made an initial court appearance as of Thursday morning. Jefferson Parish records show he was jailed there without bond, charged as a fugitive.