ATLANTA (AP) — Atlanta police on Tuesday arrested a 22-year-old man in the shooting death of a 6-month-old baby a day earlier.

Grayson Fleming-Gray was shot just after 2:30 p.m. Monday while riding in a vehicle, police said. Mayor Andre Dickens announced the arrest during a news conference Tuesday afternoon, praising police for their quick work in making an arrest.

“They were all over the place asking and looking for clues,” Dickens said. “They worked 24 hours nonstop until they resolved this issue and now a suspect is under arrest.”

Atlanta police Chief Rodney Bryant identified the suspect as 22-year-old Dequasie Little. He was found in Decatur and arrested on charges of aggravated assault and felony murder. It wasn’t immediately clear whether he had an attorney who could comment on the charges. 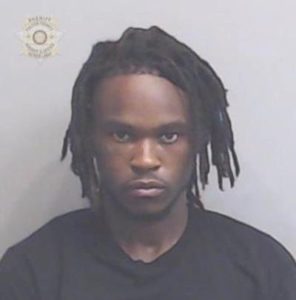 “I won’t cheerlead the fact that we were able to apprehend this person in such a short period of time,” Bryant said. “I’m mad as hell that the incident occurred in the first place.”

Bryant said the investigation is ongoing and police will continue to pursue others they believe were involved. He declined to comment on the motive behind the shooting and seemed to allude to Little’s multiple past arrests: “His actions are not a surprise. I’ll leave it at that.”

He said violence throughout the country has spiraled out of control and too many people are turning to guns to resolve conflicts.

Bryant said he and the mayor were speechless when they met with the baby’s mother Monday.

Dickens called on members of the community to advocate for people to put guns down and advocate for the resolution of conflicts by de-escalation. He said he’s met with dozens of nonprofits and community leaders to enlist their help getting through to young people to help them become productive members of society rather than turning to violence.

Fulton County District Attorney Fani Willis stressed that her office is working with the mayor and law enforcement to aggressively target repeat offenders and to ensure that they get steep sentences.