LOS ANGELES (AP) — Police are investigating an allegation of assault against Los Angeles Dodgers pitcher Trevor Bauer and an attorney for the accuser says the woman has obtained a protection order.

Major League Baseball also is looking into the allegation.

“The Dodgers were made aware of the allegations against Trevor Bauer late this afternoon and immediately contacted MLB, which will be handling this matter,” the team said in a statement during its game Tuesday night against San Francisco. 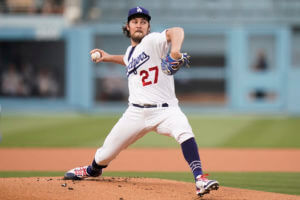 “The Dodgers take any allegations of this nature very seriously, but will have no further comment at this time,” the club said.

The protection order was obtained under the Domestic Violence Prevention Act and was the result of an “assault that took place at the hands of Mr. Bauer” where the woman “suffered severe physical and emotional pain,” attorney Marc Garelick said.

Pasadena police spokesman Lt. Bill Grisafe confirmed that the department is looking into accusations of an assault involving Bauer, but provided no additional details.

Jon Fetterolf, Bauer’s co-agent, disputed the allegations that Bauer committed any nonconsensual violence. He said Bauer met the woman in April, and the two had “a brief and wholly consensual sexual relationship initiated” by the woman.

“Her basis for filing a protection order is nonexistent, fraudulent, and deliberately omits key facts, information, and her own relevant communications,” Fetterolf said. “Any allegations that the pair’s encounters were not 100% consensual are baseless, defamatory, and will be refuted to the fullest extent of the law.”

Fetterolf said the woman asked Bauer repeatedly for “rough” sexual encounters, demanding to be “choked out” and slapped in the face.

Fetterolf claimed Bauer and the woman remained friendly in text messages after their encounters. The attorney said Bauer became concerned and confused after the woman told him she had sought medical care for a concussion days after their second and final encounter.

Bauer and the woman haven’t corresponded for over a month and haven’t seen each other in six weeks, Fetterolf said.

“Our goal is to keep Mr. Bauer from contacting our client in any way possible,” Garelick said.

The outspoken Bauer joined his hometown Dodgers earlier this year with a $102 million, three-year contract after winning his first Cy Young with the Cincinnati Reds last season. He is 8-5 with a 2.59 ERA for his new team after beating the Giants on Monday night.