LAGUNA WOODS, Calif. (AP) — A gunman in a deadly attack at a Southern California church was a Chinese immigrant motivated by hate for Taiwanese people, authorities said.

The shooter killed Dr. John Cheng, 52, and wounded five others during a lunch held by Irvine Taiwanese Presbyterian Church, which worships at Geneva Presbyterian Church in Laguna Woods, authorities said at a Monday news conference. 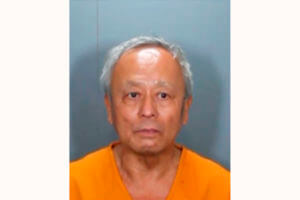 In this photo released Monday, May 16, 2022, by the Orange County Sheriff’s Department is David Chou. Authorities said Chou, the gunman in Sunday’s deadly attack at a Southern California church, was a Chinese immigrant motivated by hate for Taiwanese people. Chou was booked on one count of murder and five counts of attempted murder. (Orange County Sheriff’s Department via AP)

Orange County Sheriff Don Barnes said the motive of the shooting was a grievance between the shooter, identified as a Chinese immigrant and U.S. citizen, and the Taiwanese community. China claims Taiwan is a part of its national territory and has not ruled out force to bring the island under its rule.

The suspect was identified as David Chou, 68, of Las Vegas. He has been booked on one count of murder and five counts of attempted murder and is being held on $1 million bail.

Chou is expected to appear in state court Tuesday and it was not immediately clear whether he had an attorney who could speak on his behalf. A federal hate crimes investigation is also ongoing.

Chou’s family was among many that were apparently forcibly removed from China to Taiwan sometime after 1948, Orange County District Attorney Todd Spitzer said. Chou’s hatred toward the island, documented in hand-written notes that authorities found, seems like it began when he felt he wasn’t treated well while living there.

Barnes, the sheriff, said Chou drove from Las Vegas to the Orange County church, where he was not a regular attendee, secured the doors with chains, super glue and nails and started shooting. The gunman had placed four Molotov cocktail-like devices inside the church. 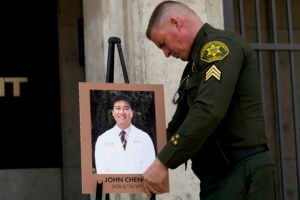 Barnes said Cheng, a sports medicine doctor who is survived by a wife and two children, heroically charged at the shooter and attempted to disarm him, allowing others to intervene. Cheng probably saved the lives “of upwards of dozens of people,” the sheriff said.

A pastor hit the gunman on the head with a chair and parishioners hog-tied him with electrical cords. But Cheng was hit by gunfire.

“I will tell you that evil was in that church,” Spitzer said, who added that Chou had “an absolute bias” against Taiwan and its people.

A former neighbor, meanwhile, says Chou’s life unraveled after he was nearly beaten to death several years ago.

Chou had been a pleasant man who used to own the Las Vegas apartment building where he lived, Balmore Orellana told The Associated Press.

But Orellana said Chou received a head injury and serious body injuries in an attack by a tenant and he sold the property. The neighbor said that last summer Chou fired a gun inside his apartment. No one was hurt but he was evicted. 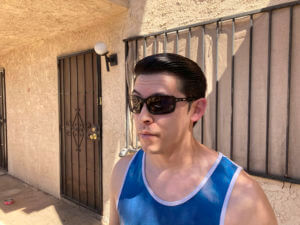 Balmore Orellana talks with a reporter about his former landlord and neighbor, David Chou, in Las Vegas, Monday, May 16, 2022. Authorities in Orange County, Calif., say Chou opened fire with a gun a day earlier at a Southern California church before a pastor hit him with a chair and parishioners hog-tied him with electrical cords. (AP Photo/Ken Ritter)

Orellana says Chou’s mental ability seemed to diminish in recent months, he was angry that the government didn’t provide comfort in his retirement, and he may have been homeless.

At the California church, Jerry Chen had just stepped into the kitchen of the church’s fellowship hall around 1:30 p.m. Sunday when he heard the gunshots.

Chen, 72, a longtime member of the Irvine Taiwanese Presbyterian Church, peeked around the corner and saw others screaming, running and ducking under tables.

Samuel Nganga, a member of Geneva and a caretaker for the church, said he was starting to clean up in the kitchen when he heard the shots.

He and others crawled out on their hands and knees to escape.

Four of the five people wounded suffered critical gunshot injuries. Authorities on Monday said two of the wounded were in good condition, two were in stable condition and the status of the fifth patient was undetermined. 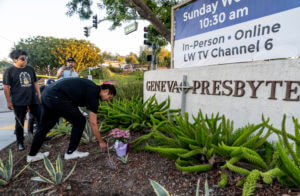 Chen said a group of about 40 congregants had gathered in the fellowship hall for a luncheon after a morning service to welcome their former Pastor Billy Chang, a beloved and respected community member who had served the church for 20 years. Chang moved back to Taiwan two years ago. This was his first time back stateside, Chen said.

Everyone had just finished lunch and were taking photos with Chang when Chen went into the kitchen, he said. That’s when he heard the gunshots. People told him afterward that the gunman had stopped to reload when Chang hit him on the head with the chair.

“This is just so sad,” Chen said. “I never, ever thought something like this would happen in my church, in my community.”

The shooting came a day after an 18-year-old man shot and killed 10 people at a supermarket in Buffalo, New York in a racist rampage where the white gunman allegedly targeted a supermarket in a predominantly Black neighborhood.

Laguna Woods was built as a senior living community and later became a city. More than 80% of residents in the city of 18,000 people about 50 miles (80 kilometers) southeast of Los Angeles are at least 65.

Those wounded by gunshots included four Asian men, ages 66, 75, 82 and 92, and an 86-year-old Asian woman, the sheriff’s department said.
It was not immediately clear whether all of the victims were of Taiwanese descent.

Tensions between China and Taiwan are at the highest in decades, with Beijing stepping up its military harassment by flying fighter jets toward the self-governing island. China has not ruled out force to reunify with Taiwan, which split from the mainland during a civil war in 1949.

Taiwan’s chief representative in the U.S., Bi-khim Hsiao, offered condolences to the families on Twitter.

“I join the families of the victims and Taiwanese American communities in grief and pray for the speedy recovery of the wounded survivors,” Hsiao wrote on Sunday.
___
Ritter reported from Las Vegas. Bharath reported from Los Angeles. Associated Press journalists Stefanie Dazio and John Antczak in Los Angeles also contributed to this story. News Researcher Rhonda Shafner contributed from New York.
___
Associated Press religion coverage receives support through the AP’s collaboration with The Conversation US, with funding from Lilly Endowment Inc. The AP is solely responsible for this content. 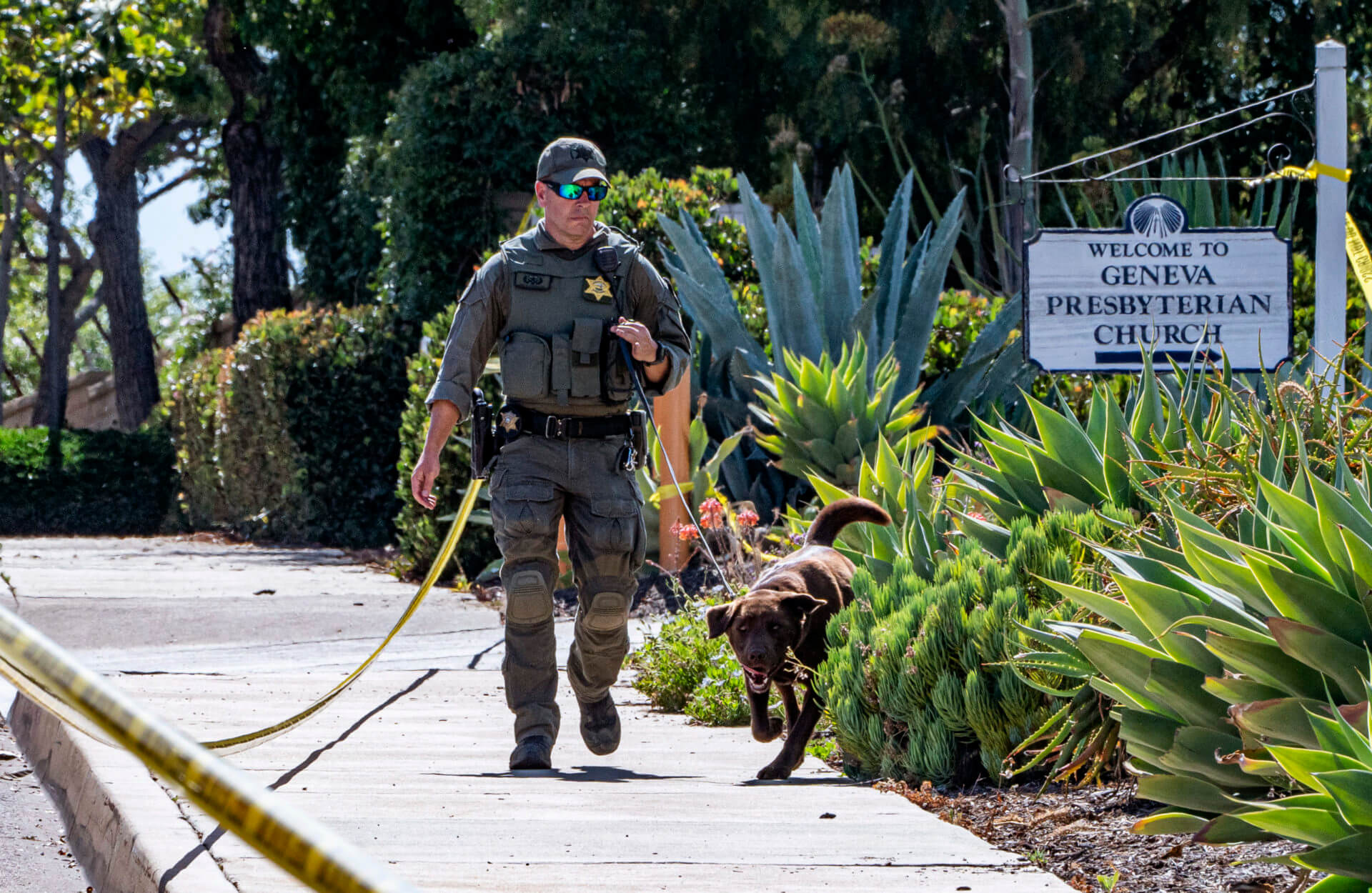