BAKERSFIELD, Calif. (KERO) — The trial of Matthew Queen, who stands accused of torturing and killing a man in the so-called Bakersfield 3 case, is scheduled to begin April 4 in Bakersfield, California.

To recap the case, Spring 2018 was a painful time for the families of James Kulstad, Micah Holsonbake, and Baylee Despot. These three young adults, who all ran the same circle, each showing up missing or killed.

There was slow progress in each investigation as the unsolved cases came to be known as the Bakersfield 3.

Diane Byrne, Jane Parrent, and Cheryl Holsonbake, the mothers of the Bakersfield 3, have never stopped searching for answers. 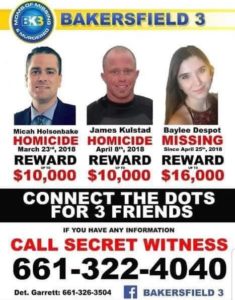 In August of 2018, the first break in Micah’s disappearance came when, much to the dismay of loved ones, a severed arm was discovered in the Kern River in Bakersfield. That December, Bakersfield Police announced Holsonbake’s case was now a homicide. What happened to Holsonbake would continue to be mystery that slowly unraveled. In August of 2021, his skull would be located near the Kern River.

Over the years, the mothers of the Bakersfield 3 continued to bring attention to these cases, starting the nonprofit Bakersfield 3 Charity and donating $17,000 to the Kern County Sheriff’s Office for a sonar search system.

Then, in 2019, a new name entered the mix: Matthew Queen, the alleged former boyfriend of Despot.

In July of 2019, following a two-hour standoff, Queen was arrested on suspicion of kidnapping and weapons charges.

A year later in May of 2020, the Kern County District Attorney’s office announced that after a two-year long investigation, Queen would be charged in the torture and death of Holsonbake. 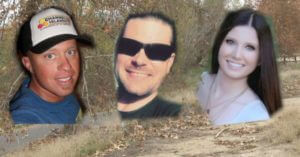 Police believed Queen and Despot kidnapped, restrained, and tortured Holsonbake before killing him.

A third man, Matthew Vandecasteele, was also charged in the case. It is believed that Vandecasteele’s garage was the location of Holsonbake’s death, according to court documents. Vandecasteele agreed to take a plea in exchange for his testimony in Queen’s trial.

Court TV will provide gavel-to-gavel coverage of all proceedings.

This story was originally published March 21, 2022 by KERO in Bakersfield, an E.W. Scripps Company.