She pleaded not guilty to all four counts and will face a jury trial.

Mosby’s attorney, A. Scott Bolden, requested that the trial be held within 60 days due to the upcoming election. 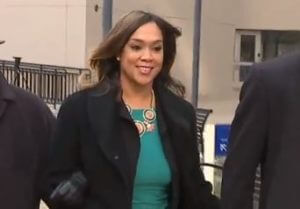 If Attorney Mosby’s counsel gets their way, it’ll be a speedy trial beginning within the next 2 months

“We are four months from my election. This has been a very public sort of investigation into every aspect of my life and the only thing that I’m asking for is for this not to be tried in the court of public opinion but for me to be tried right now,” said Mosby on Wednesday.

After Wednesday’s trip to federal court State’s Attorney Mosby and her attorney A. Scott Bolden are gearing up for what they hope will be a speedy trial.

But Attorney Andy Alperstein says he’s eager to see what challenges COVID-19 imposes on that request.

“The courts are backed up from the first round of closing. You’ve got people who are incarcerated waiting to go to trial and they normally would have a higher priority than somebody who’s on the street on a white collar type of case,” said Andy Alperstein of Alperstein & Diener, P.A.

Mosby’s attorney also asked the judge to force the prosecution to immediately turnover discovery evidence. Charging prosecutor Leo Wise pushed back, claiming that Bolden had not followed court procedure to obtain it, for which the judge agreed. In response, Bolden said he anticipates making a number of pre-trial motions.

Bolden has been critical of Wise, alleging that charges he levied against Mosby are politically motivated.

“What was notable was her lawyers from a DC law firm did not seem to be familiar with the local rules and practices regarding discover and the magistrate judge very nicely said the government’s understanding is what the court’s rules are and you should look at that,” said Alperstein.

U.S. Attorneys responded to that demand requesting Mosby’s counsel to file it formally.

Both parties agreed for a jury trial that could last up to a week.

Judge Lydia Griggsby, who was appointed last year by President Joe Biden, has been assigned to oversee the case.

Mosby was federally indicted January 13 on perjury charges and making false statements on mortgage applications, related to the purchase of two vacation homes in Florida.

Prosecutors allege that Mosby twice lied in 2020 when she claimed COVID-19 related financial hardships, in order to withdraw $90,000 from her City Deferred Compensation Plan.

She also allegedly failed on the mortgage applications to disclose over $45,022 of debt owed to the IRS at the time.

This story was originally published Feb. 4, 2022, by WMAR in Baltimore, an E.W. Scripps Company.