BALTIMORE (AP) — Baltimore’s top prosecutor is innocent of federal charges that she lied about the pandemic harming her personal businesses to withdraw money from her retirement savings, her lawyer argued as he defended her purchase of two Florida vacation homes.

Baltimore State’s Attorney Marilyn Mosby is accused of lying about meeting qualifications for coronavirus-related distributions from a city retirement plan.
Her attorney, A. Scott Bolden, told reporters on Monday that Mosby was entitled to make an early withdrawal from her retirement savings without facing any penalties. 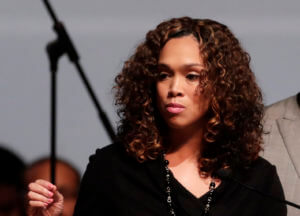 “I’m telling you she’s not only innocent, but we have professionals who she consulted with,” Bolden said at a news conference, according to The Baltimore Sun.

Mosby was indicted last Thursday on charges of perjury and making false mortgage applications to purchase a home in Kissimmee, Florida, and a condominium in Long Boat Key, Florida.

The indictment also alleges that Mosby, who received her full gross state’s attorney salary of $247,955, falsely certified that she experienced financial hardships because of the coronavirus when she submitted requests to withdraw $90,000 from Baltimore’s deferred compensation plans.

Bolden indicated that Mosby’s fledgling private businesses — Mahogany Elite Travel, Mahogany Elite Enterprises LLC and Mahogany Elite Consulting — allowed her to make the withdrawals. According to newspaper, Mosby has previously said she founded the companies to “help underserved Black families who don’t usually have the opportunity to travel outside of urban cities so they can vacation at various destinations throughout the world at affordable rates.”

“These were businesses that were starting. As a result, that does not disqualify her from, along with some other facts that we have to present, that certainly absolve her of any wrongdoing,” Bolden said.

On Friday, Mosby said she didn’t lie on her mortgage application.

“I wanted the people of Baltimore to hear it from me: I’ve done nothing wrong. I did not defraud anyone to take money from my retirement savings,” she said.

Mosby, 41, rose to national prominence in 2015 when she pursued criminal charges against six police officers in the death of Freddie Gray, a Black man who suffered fatal injuries in police custody, sparking protests and riots. None of the officers were convicted.

Mosby’s husband is Baltimore City Council President Nick Mosby. He has not been charged with any crimes.