RICHMOND, Va. (AP) — Virginia Gov. Ralph Northam granted posthumous pardons Tuesday to seven Black men who were executed in 1951 for the rape of a white woman, in a case that attracted pleas for mercy from around the world and in recent years has been denounced as an example of racial disparity in the use of the death penalty.

Northam announced the pardons after meeting with about a dozen descendants of the men and their advocates. Cries and sobs could be heard from some of the descendants after Northam’s announcement.

The “Martinsville Seven,” as the men became known, were all convicted of raping 32-year-old Ruby Stroud Floyd, a white woman who had gone to a predominantly black neighborhood in Martinsville, Virginia, on Jan. 8, 1949, to collect money for clothes she had sold. 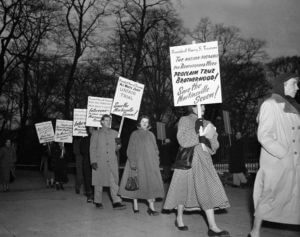 FILE – In this Jan. 30, 1951 file photo, as temperatures drop below freezing, demonstrators march in front of the White House in Washington, in what they said was an effort to persuade President Harry Truman to halt execution of seven Black men sentenced to death in Virginia on charges of raping a white woman. (AP Photo/Henry Burroughs, File)

Four of the men were executed in Virginia’s electric chair on Feb. 2, 1951. Three days later, the remaining three were also electrocuted. All of them were tried by all white juries.

At the time, rape was a capital offense. But Northam said Tuesday that the death penalty for rape was almost entirely applied to Black people. From 1908 — when Virginia began using the electric chair — to 1951, state records show that all 45 people executed for rape were Black, he said.

“These men were executed because they were Black and that’s not right,” Northam said.

Walter Grayson is the son of Francis DeSales Grayson, who was one of the seven. He sobbed loudly when the pardons were announced Tuesday and said “thank you Jesus. Thank you Lord.”

In December, advocates and descendants of the men asked Northam to issue posthumous pardons. Their petition does not argue that the men were innocent, but says their trials were unfair and the punishment was extreme and unjust.

In March, Northam, a Democrat, signed legislation passed by the Democrat-controlled legislature abolishing the state’s death penalty. It was a dramatic shift for Virginia, a state that had the second-highest number of executions in the U.S. The case of the Martinsville Seven was cited during the legislative debate as an example of the disproportionate use of the death penalty against people of color.