ROCK ISLAND, Okla. (AP) — The body of a woman reported missing in Fort Smith, Arkansas, has been found in a pond in eastern Oklahoma and three men were arrested in connection with her death, according to the Oklahoma State Bureau of Investigation.

The body of Tara Strozier, 40, was found in the pond in Rock Island on the Oklahoma-Arkansas state line, about 15 miles (24 kilometers) southwest of Fort Smith, the OSBI said Friday. 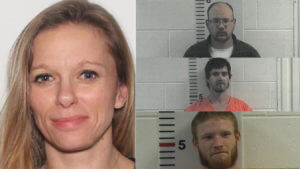 Alex Nathaniel Davis, 30, Austin Johnson, 23, and Kaelin Hutchinson, 24, are jailed in connection with the death. Davis was arrested on first-degree murder and kidnapping warrants, Johnson on a murder warrant and Hutchinson for obstruction, according to the OSBI.

Jail records do not list attorneys who could speak on their behalf.

Strozier was reported missing July 19 in Fort Smith and the LeFlore County Sheriff’s Office asked the OSBI for assistance after her vehicle was found abandoned five days later in Cameron, Oklahoma, about 4 miles (6 kilometers) southwest of Rock Island.

The OSBI said investigators believe Strozier was tortured, killed and her body weighted down then left in the pond, where it was found Thursday.