WINONA, Miss. (AP) — A Mississippi man whose murder conviction was overturned by the U.S. Supreme Court for racial bias was granted his freedom for the first time in 22 years Monday while prosecutors decide whether to retry him for a seventh time. 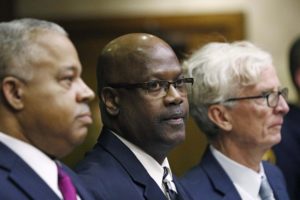 Defendant Curtis Flowers, center, stands with his attorneys, Henderson Hill, left, and Rob McDuff, at a bail hearing in Winona, Miss., Monday, Dec. 16, 2019. Flowers has been tried six times for murder in the 1996 shooting deaths of four people in a furniture store. Although sentenced to death during the sixth trial, the U.S. Supreme Court overturned that conviction in June, finding that prosecutors had shown a pattern of improperly excluding African American jurors in the trials of Flowers, who is black. Flowers was granted bail. (AP Photo/Rogelio V. Solis) ///

A judge set a bond of $250,000 for Curtis Flowers, but told him he would have to wear an electronic monitor while awaiting a decision by the district attorney’s office to either try him again or drop the charges.

Flowers was convicted four times in connection with a quadruple slaying in the city of Winona in 1996: twice for individual slayings and twice for all four killings. Two other trials involving all four deaths ended in mistrials. Each of the convictions was overturned, but Flowers has remained in jail because the original murder indictment is still active.

Circuit Judge Joseph Loper said it was “troubling” that prosecutors had not responded to a defense motion to drop the charges against Flowers. He said if prosecutors do not respond, “the state will reap the whirlwind” from him.

Assistant District Attorney William Hopper left the courtroom without speaking to news reporters. Earlier, he declined to comment when asked if the district attorney’s office would try Flowers a seventh time.

Flowers’ attorney Rob McDuff said after the hearing that a person who wanted to remain anonymous was putting up the standard 10% percent, or $250,000, required for Flowers’ release. McDuff said Flowers could be freed later Monday.

Supporters who were among the more than 150 people packing the wooden pews of the 1970s-era courtroom hugged Flowers after the judge announced his decision. His father, Archie Lee Flowers, choked back tears. He said the first thing he would do when his son was released, was pray.

The elder Flowers said he frequently visited his son in prison, where they sang and prayed together. He said he has always believed in his son’s innocence.

During his sixth trial in 2010, Flowers was sentenced to death. The U.S. Supreme Court overturned that conviction in June, finding that prosecutors had shown an unconstitutional pattern of excluding African American jurors in the trials of Flowers, who is black.

After the Supreme Court ruling, Flowers was moved off death row at the Mississippi State Penitentiary at Parchman and taken to a regional jail in the central Mississippi town of Louisville. 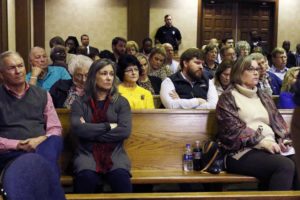 Community residents listen as a judge grants bail Curtis Flowers, whose murder conviction was overturned by the U.S. Supreme Court for racial bias, Monday, Dec. 16, 2019 in Winona, Miss. Flowers is being released from custody for the first time in 22 years. Flowers, has been tried six times for murder in the 1996 shooting deaths of four people in a furniture store. (AP Photo/Rogelio V. Solis)

“This case is unprecedented in the history of the American legal system,” McDuff told the judge during Monday’s hearing. He said Flowers had spent 23 years in prison “without a lawful conviction to justify his incarceration” and had an “exemplary” record of good behavior in prison.

Hopper had asked the judge to deny bond. He cited several examples of evidence that he said pointed to Flowers’ guilt.

Four people were shot to death on July 16, 1996, in the Tardy Furniture store in the north Mississippi city of Winona. They were owner Bertha Tardy, 59, and three employees: 45-year-old Carmen Rigby, 42-year-old Robert Golden and 16-year-old Derrick “Bobo” Stewart.

A daughter of Tardy was in court Monday. She sat across the aisle and one row back from Flowers’ daughter, Crystal Ghoston, who sat in the front row.

Ghoston, 26, told The Associated Press that she had seen her father only once since he was imprisoned: about 10 years ago, and even then she could only talk to him through a reinforced window. She said they wrote letters to each other and spoke on the phone every few weeks, and that he talked about meeting her 2-year-old daughter, who calls him “Paw-Paw.”

“We’re so much alike,” Ghoston said. “We laugh all the time on the phone.”

Ghoston, of Grenada, Mississippi, said after her father’s release, they will take their first-ever photo together.

Winona sits near the crossroads of Interstate 55, the major north-south artery in Mississippi, and U.S. Highway 82, which runs east to west. It about a half-hour’s drive from the flatlands of the Mississippi Delta. Among its 4,300 residents, about 48% are black and 44% are white. Census Bureau figures show that about 30% live in poverty.

In mid-November, four black voters and a branch of the NAACP filed a federal lawsuit asking a judge to permanently order Evans and his assistants to stop using peremptory challenges to remove African American residents as potential jurors because of their race.

The lawsuit cites an analysis of jury strikes by Evans from 1992 to 2017 by American Public Media’s “In the Dark” podcast. It found Evans’ office used peremptory strikes, which lawyers typically don’t have to explain, to remove 50% of eligible black jurors, but only 11% of eligible white jurors. The analysis was performed as part of a series of episodes questioning Flowers’ conviction in his sixth trial. 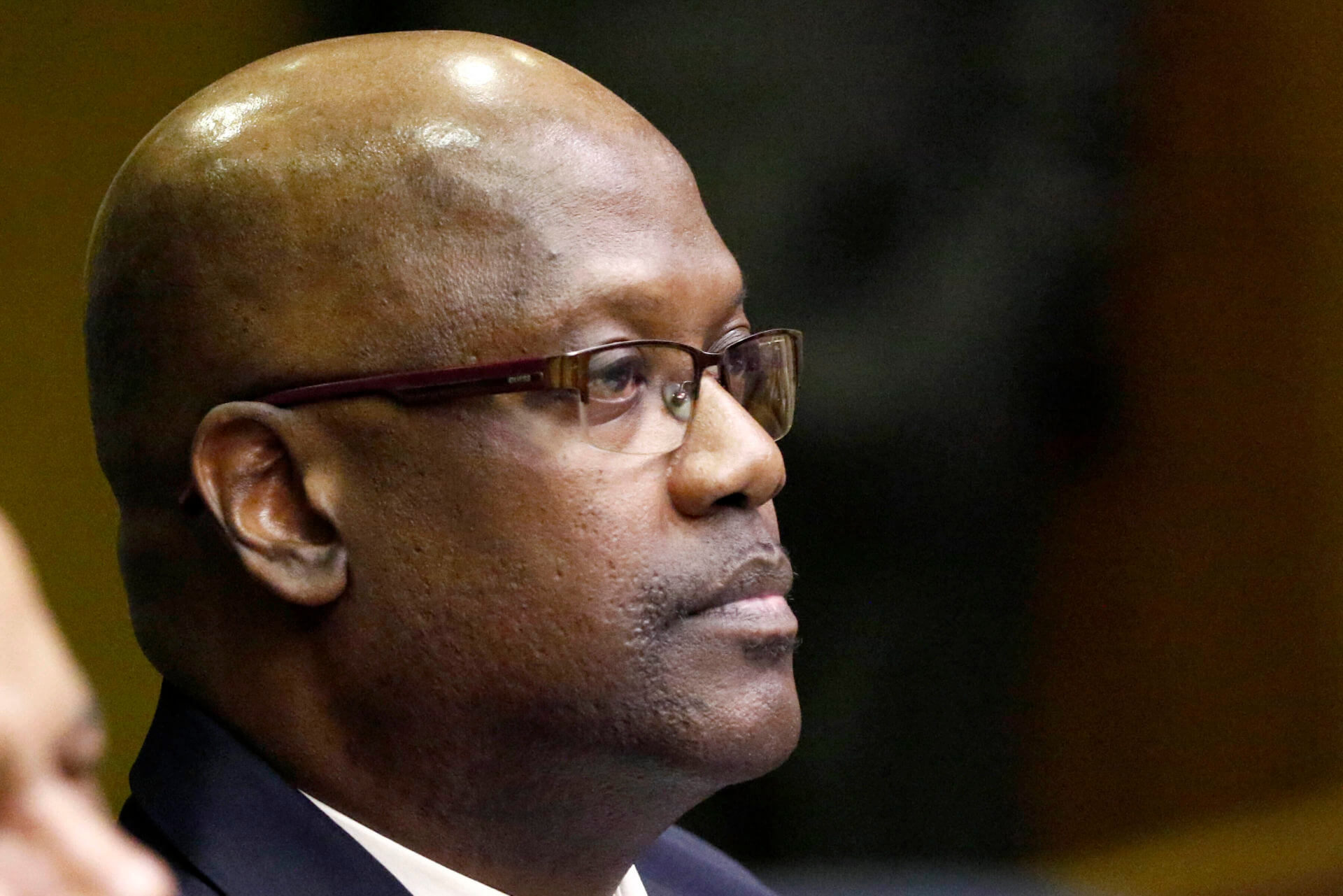 Defendant Curtis Flowers, stands at a bail hearing in Winona, Miss., Monday, Dec. 16, 2019. Flowers has been tried six times for murder in the 1996 shooting deaths of four people in a furniture store. Although sentenced to death during the sixth trial, the U.S. Supreme Court overturned that conviction in June, finding that prosecutors had shown a pattern of improperly excluding African American jurors in the trials of Flowers, who is black. Flowers was granted bail. (AP Photo/Rogelio V. Solis)
MORE NEWS