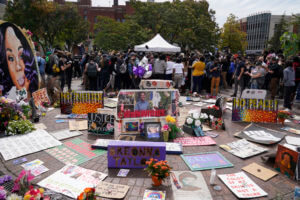 LOUISVILLE, Ky. (AP) — An audio recording of grand jury proceedings that ended with no criminal charges against police officers for the fatal shooting of Breonna Taylor was slated to be released Friday.

A court in Louisville ruled that the content of the proceedings, typically kept secret, should be made public by noontime.

Kentucky Attorney General Daniel Cameron, whose office led the investigation into police actions in the Taylor shooting, did not object to the file’s release. On Wednesday, his office asked for a week’s extension to redact personal information from the recording before it is heard by the public. The judge gave him two days.

Cameron, a Republican and the state’s first African American attorney general, has been criticized since announcing last week that the grand jury did not charge the officers for killing Taylor. The officers used a narcotics warrant to enter Taylor’s Louisville apartment on March 13 and shot her after Taylor’s boyfriend fired a shot at them. The 26-year-old emergency medical worker was shot five times. Police found no drugs there.

Cameron said two officers who fired their guns, hitting Taylor, were justified because Taylor’s boyfriend had fired at them first. The boyfriend had said he thought someone was breaking in.

Protesters have taken to the streets in Louisville and around the country to demand more accountability in the case. Activists, Taylor’s family and one of the grand jurors called for the grand jury file to be released.

The audio recording of the jury proceedings will be added to the public court file of fired Officer Brett Hankison. The grand jury charged Hankison with three counts of wanton endangerment for firing into a neighboring apartment where people were inside. No one was hit. He pleaded not guilty on Monday. Cameron said there was no conclusive evidence that any of Hankison’s shots hit Taylor.

The developments come a day after the first woman to lead the Louisiana Metro Police Department, Yvette Gentry, was sworn in Thursday as the department’s interim chief.

“I know I’m interim,” Gentry said at a small ceremony streamed on the department’s Facebook page. “But I represent something different to a lot of people being the first woman to take this title, so I’m not going to shortchange that.”