MINNEAPOLIS (AP) — A Minnesota court is investigating how a British newspaper obtained police body-camera footage showing the arrest and death of George Floyd.

The Daily Mail on Monday published parts of videos from two Minneapolis police officers involved in Floyd’s arrest on May 25. A Hennepin County judge last month allowed journalists and members of the public to view the footage by appointment but has not yet ruled on a motion by a coalition of news organizations, including The Associated Press, seeking public access to the videos. 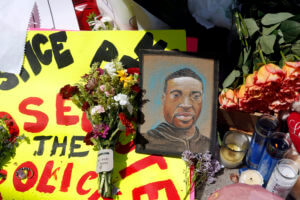 A chain portrait of George Floyd is part of the memorial for him, Wednesday, May 27, 2020, near the site of the arrest of Floyd who died in police custody Monday night in Minneapolis after video shared online by a bystander showed a white officer kneeling on his neck during his arrest as he pleaded that he couldn’t breathe. (AP Photo/Jim Mone)

Minnesota Attorney General Keith Ellison, whose office is leading the prosecution of the four fired Minneapolis police officers charged in Floyd’s death, said he was not the source of the leak.

“We will continue to take the strictest precautions to ensure a fair trial,” Ellison said in a statement.

Representatives of the Daily Mail did not immediately respond to an AP request for comment Monday.

Floyd, a handcuffed Black man, died after Officer Derek Chauvin, who is white, held his knee against Floyd’s neck for nearly eight minutes as Floyd pleaded that he could not breathe. Floyd’s death touched off protests worldwide.