SAVANNAH, Ga. (AP) — Attorneys in the upcoming federal hate crimes trial of the three white men who chased and killed Ahmaud Arbery want the jury pool to come from an expansive area of Georgia that covers 43 counties, including some that are a four-hour drive from the courthouse where the trial will be held.

Prosecutors and defense attorneys filed a joint motion Thursday in U.S. District Court, with both sides in agreement that casting a wider net for potential jurors will improve the odds of seating an impartial jury. The first trial in Arbery’s slaying, seen by many as a reckoning on racial injustice in the legal system, resulted in murder convictions in a state court the day before Thanksgiving.

Father and son Greg and Travis McMichael and their neighbor, William “Roddie” Bryan, were all found guilty of murder and other crimes in the Feb. 23, 2020, killing of Arbery. Bryan recorded cellphone video of Travis McMichael blasting the 25-year-old Black man with a shotgun after Arbery spent several minutes running as the three men chased him in pickup trucks.

The murder trial in state court was not the end of the legal troubles for the McMichaels and Bryan. They now face hate crime charges at the federal level that allege they violated Arbery’s civil rights, unjustly pursuing and threatening him on a public street, because he was Black.

A judge has scheduled jury selection in the federal trial to begin Feb. 7. The McMichaels and Bryan pleaded not guilty to the hate crime charges in May.

Like the state trial, the federal case will be tried in Glynn County, where the killing occurred just outside the port city of Brunswick. Typically, a federal jury would be drawn from residents of Glynn County as well as six neighboring counties that make up the Brunswick Division of the federal court system’s Southern District of Georgia.

“The parties believe that it is likely that many potential jurors from the Brunswick Division will have experienced sustained exposure to the case and may have formed immutable opinions, in one direction or the other, that will ultimately preclude them from sitting on a jury in this case,” the attorneys said in their legal motion.

They noted that court rules allow for a jury pool to be assembled from the entire Southern District, which has a population of more than 1.6 million people.
The district covers 43 of Georgia’s 159 counties, with its largest cities being Savannah and Augusta. Farthest from the courthouse is rural Wilkes County, located more than 210 miles (338 kilometers) north of Brunswick.

The next pretrial hearing in the federal case is scheduled for Dec. 20.

The McMichaels armed themselves with guns and jumped in a pickup truck after they spotted Arbery running past their home on a Sunday afternoon last year. They later told police they suspected he was a burglar, though they did not see him committing any crimes. 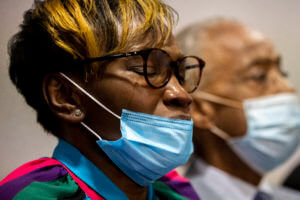 Bryan joined the chase in his own truck, telling police he used the vehicle to force Arbery into a ditch and cut off his escape from the subdivision. He used his cellphone to record video of Travis McMichael shooting Arbery as he tried to run around the McMichael’s idling truck.

Travis McMichael testified he shot Arbery in self-defense after the running man attacked him and tried to grab his gun. Defense attorneys said the three men had reasonable grounds to suspect Arbery was a criminal and wanted only to detain him until police could arrive.

Prosecutors and defense attorneys in the federal case say they hope to avoid the sort of slow-moving grind that made jury selection last 2 1/2 weeks before the state trial could begin.

The state’s jury pool was drawn exclusively from Glynn County, where Arbery’s death had dominated news reports and social media feeds. Most potential jurors arrived at the courthouse already knowing basic facts about the case, and many were dismissed for having strong opinions.

In a separate legal filing in the federal case, prosecutors and defense attorneys asked the judge to approve a 14-page questionnaire to be sent to potential jurors ahead of time along with their jury duty notices. They proposed using the questionnaires to identify any pool members that both sides agree are too biased to fairly hear the case before jury selection begins.

Attorneys noted it would not be the first time a federal jury had been summoned from all 43 counties in Georgia’s Southern District. That happened in 2005 for the federal corruption trial of Charles Walker of Augusta, who had been the powerful Democratic leader of the state Senate.