LANSING, Mich. (WSYM) — After nearly 25 years in prison, Melvin and George DeJesus walked free on Tuesday. The brothers were wrongfully convicted of murder and felony firearm possession in 1997.

George and Melvin were convicted of the murder of a Pontiac woman in July of 1995. According to authorities, she was found with a pillowcase over her head and wire bindings around her neck, wrists and ankles.

The exoneration is thanks to work from the Cooley Law School Innocence Project and the University of Michigan Innocence Clinic, which reached out to the Attorney General’s Conviction Integrity Unit to review the brothers’ case.

According to Assistant Attorney General Robyn Frankel, the case against the DeJesus brothers relied nearly entirely on the testimony of Brandon Gohagen, whose own DNA was found at the scene and who was ultimately found responsible for the murder. Advancements in DNA technology helped clear the two brothers. 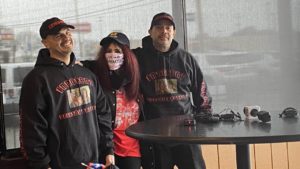 This image from WSYM shows brothers Melvin and George DeJesus after they left prison 25 years after their wrongful convictions. (WSYM)

“This case was prosecuted because there was a DNA hit. In the earlier case there was nothing and it wasn’t until 20 years later, with advancements in DNA testing, that they were able to obtain a profile and run it through CODIS,” said Frankel.

Gohagen is currently in prison serving a life sentence after being convicted of the sexual assault and murder of another woman. George and Melvin say their release is still sinking in.

George and Melvin will receive support like reentry housing and other services for the next couple of years. Today Melvin says his plan includes lots of hugs and a big cheeseburger.

This story was originally published March 22 by WSYM in Lansing, Michigan, an E.W. Scripps Company.