SAN JOSE, Calif. (AP) — A woman was detained Tuesday as a “person of interest” after what authorities called inconsistencies in her statements to police about the kidnapping of a 3-month-old baby who was taken from his San Francisco Bay Area home by a stranger a day earlier, police said. 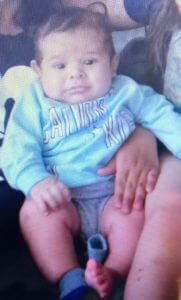 This photo released Monday, April 25, 2022, by the San Jose Police Department shows three-month old Brandon Cuellar. California authorities and the FBI are searching for the 3-month-old baby who was reported to have been taken from his San Francisco Bay Area home by a stranger. Police say a man entered an apartment in San Jose around 1 p.m. Monday and walked away with little Brandon Cuellar in a baby carrier. (San Jose Police Department via AP)

The woman, who has not been identified, was with the child’s grandmother before little Brandon Cuellar was abducted Monday by an unknown man, San Jose Police spokesman Sgt. Christian Camarillo told reporters.

“This was a person who was with the grandmother yesterday when they went shopping, she was present at the apartment complex when this happened,” he said. “There have been some inconsistencies with what she has told us. Obviously, drawing our attention to what she knows about this.”

The man entered a San Jose apartment at about 1 p.m. Monday and walked away with the infant in a baby carrier, police said.

Police released a video showing the man walking down the sidewalk holding the baby carrier covered by a white blanket.

“The family does not recognize this suspect,” police tweeted.

Camarillo told reporters Monday that the kidnapping was reported by the baby’s grandmother. 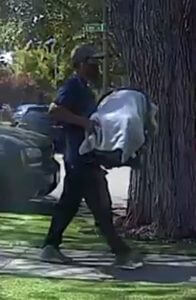 “According to the grandmother, she came home to this apartment…. She took the baby in the apartment, went downstairs to unload some groceries,” Camarillo said. “In that short amount of time someone entered the apartment … and left with the baby.”

Camarillo said the baby’s mother was at work when the abduction happened.

“Dad right now is out of the picture. He is incarcerated. I don’t know, you know, whether that is going to play into this, but obviously we are going to talk to him soon,” Camarillo said.

He said it is hard to make out the man who took the baby because he was wearing a mask.

“We need the public’s help right now in San Jose to find this baby. Today someone is walking around with a 3-month-old baby that they did not have yesterday,” he said.