MANHATTAN BEACH, Calif. (AP) — Nearly a century ago, white leaders of a Southern California city robbed a Black family of their prime beachfront land and legacy.

Descendants of Willa and Charles Bruce — including the couple’s great-great grandson — returned to the scene of the crime in Manhattan Beach on Thursday to watch Gov. Gavin Newsom sign the law that allows ownership of the property to be transferred back to the family.

The move was hailed as a major milestone in the fight for reparations and the return of lands stolen from people of color. 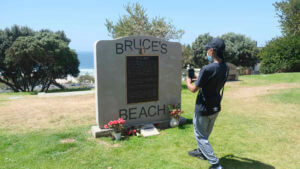 FILE – This April 8, 2021 file photo, shows a monument at Bruce’s Beach in Manhattan Beach, Calif. Gov. Gavin Newsom was expected to sign legislation Thursday, Sept. 30, 2021, to enable the transfer of ownership of prime Southern California beachfront property to heirs of a Black couple who built a small resort for Black people in the early 1900s but were harassed and finally stripped of the land by local city leaders. (Dean Musgrove/The Orange County Register via AP, File)

“There are other families waiting for this very day, to have their land returned to them,” Patricia Bruce, a cousin of Willa and Charles Bruce, told The Associated Press.

Amid rampant forced segregation in 1912, the Bruces built the first West Coast resort for Black people. Situated along what became one of Southern California’s signature beaches fronted by rows of multimillion-dollar homes, it included a lodge, café, dance hall and dressing tents.

The Bruces and their patrons faced constant racism and harassment. There even was an attempt to burn the resort down. The Manhattan Beach City Council eventually used eminent domain to take the land from the Bruces in the 1920s, purportedly for use as a park.

Yet the land lay unused for years until was transferred to the state in 1948. In 1995, it was transferred to Los Angeles County for beach operations. It came with restrictions limiting the ability to sell or transfer the property, which could only be lifted through a new state law.

The legislation unanimously approved by state lawmakers was necessary to allow the start of the complex legal process of transferring ownership of what was once known as Bruce’s Beach.

“The journey here was far from easy,” said Kavon Ward, a Black resident who learned of the property’s history and founded Justice for Bruce’s Beach.

Ward also cofounded Where Is My Land, an organization that aims to return land taken from Black Americans and get restitution. The organization is looking at several other unspecified projects, including one in California, to see if its goals are possible.

With a half-dozen descendants of the couple present Thursday, Newsom apologized for how the land was taken before signing the bill during a ceremony at the property.

“The Bruces have found mercy in the unfailing love of Jesus Christ,” said Anthony Bruce, the family’s great-great grandson, as he read a prayer during the ceremony.

Newsom suggested the move could be the start of broader reparations.

“This can be catalytic,” he said. “What we’re doing here today can be done and replicated anywhere else.”

County Supervisor Janice Hahn, who led a government push to transfer the land, said the heirs would almost certainly be millionaires now if the property had not been taken.

“The law was used to steal this property 100 years ago, and the law today will give it back,” Hahn said.

Newsom said the Bruces could have become like other leading Southern California entrepreneurs, like the Getty family that garnered fame for its oil wealth and art collection.

The Bruces’ property along the south shore of Santa Monica Bay encompasses two parcels. The county’s lifeguard training headquarters building sits there now, along a scenic beach walkway called The Strand that is lined with luxury homes overlooking the beach. 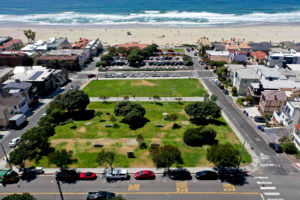 FILE – This April 8, 2021 file photo shows Bruce’s Beach in Manhattan Beach, Calif. Gov. Gavin Newsom was expected to sign legislation Thursday, Sept. 30, 2021, to enable the transfer of ownership of prime Southern California beachfront property to heirs of a Black couple who built a small resort for Black people in the early 1900s but were harassed and finally stripped of the land by local city leaders. (Dean Musgrove/The Orange County Register via AP, File)

In Manhattan Beach, an upscale Los Angeles seaside suburb, the population of 35,000 is more than 84% white and 0.8% Black, the city website says. This year, the City Council formally condemned the efforts of their early 20th century predecessors to displace the Bruces and several other Black families.

The county, meanwhile, has outlined steps needed to move forward with the transfer, including assessing the value of the parcels and trying to find a means to lessen the tax burden on the heirs.

The county also needs to vet the legal heirs of the Bruces and possibly find a new site for the lifeguard training headquarters. One option would have the heirs lease the land back to the county for continued use.

Patricia Bruce, 65, of Hawthorne, said the family has not yet decided what it will do with the property.