KGTV was inside the courtroom, where prosecutors said that there were at least five different victims and all of them appear to be service members. 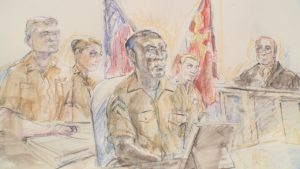 Prosecutors say that four service members came forward early last year and then a fifth service member was allegedly assaulted inside the brig where Corporal Denson was being held.

The circumstances surrounding the alleged assaults are still unknown.

According to one of the prosecutors, Wednesday’s court appearance was intended to be a plea agreement hearing, but due to procedural issues, the hearing ended early and will continue at 8 a.m. on Thursday.

The defense attorneys said that they have two witnesses who plan to testify during Thursday’s hearing.

This story was originally published March 23, 2022 by KGTV in San Diego, an E.W. Scripps Company.