SACRAMENTO, Calif. (AP) — The State Bar of California said Tuesday it is again investigating Mark Geragos, one of California’s best-known celebrity lawyers, and another prominent attorney over how money was spent from a multimillion-dollar insurance settlement related to the Armenian Genocide.

Geragos and Los Angeles attorney Brian Kabateck denied any wrongdoing and said they have cooperated in previous investigations by the bar. 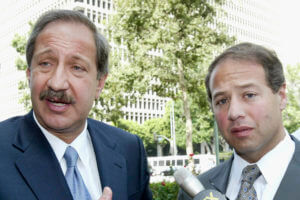 FILE – Attorneys Mark Geragos, left, and Brian Kabateck speak to the media outside the United States Federal Court building in Los Angeles, July 30, 2004, after a judge approved a multimillion-dollar settlement in a lawsuit for unpaid life insurance benefits filed by descendants of Armenians killed in the Turkish Ottoman Empire. The State Bar of California said Tuesday, Sept. 27, 2022, that it is investigating Geragos and Kabateck in connection with the spending of money in the United States and France from the settlement. (AP Photo/Nick Ut, File)

Both attorneys are caught up in an ongoing investigation of other LA lawyers including Tom Girardi stemming from a $17.5-million settlement with an insurance company based in France. The money was intended for descendants of the genocide in 1915-16 by the Turkish Ottoman Empire during World War I as well as for Armenian charities.

“The State Bar is charged with protecting the public. Confidence in our ability to do so has unfortunately been shaken in recent times by the Girardi matter and what it represents,” Ruben Duran, the state bar’s board chairman, said in a rare public disclosure of an ongoing investigation.

He said the announcement is not in itself an indication of misconduct by the lawyers, but emphasized that “the status of attorneys, or the size of their practice, cannot and will not impact our decisions to investigate misconduct.”

Duran did not disclose details of the investigation, which will determine if a notice of disciplinary charges should be filed. Any such charges would then have to be proven in a hearing before the State Bar Court and could result in the attorneys being suspended or disbarred.

An extensive investigation by the Los Angeles Times in March raised questions about how the settlement money was disbursed, including alleging that some of it went to “pet charities” of the two attorneys as well as their alma mater, Loyola Law School.

Kabateck’s biography describes him as a former president of the Los Angeles County Bar Association, Loyola Law School’s board chairman and a trustee of Loyola Marymount University.

Kabateck in a statement called the reference “to a world-class university that established a highly-regarded center to study genocides (like the Armenian Genocide, the Holocaust, the Cambodian Genocide, and other crimes against humanity) as a ‘pet’ charity is offensive and insensitive.”

“The undisputed facts are and will always be that an independent third-party appointed, approved, and overseen by the Court (like in any class action) distributed the settlement funds to the class members,” Kabateck said. Neither he nor Geragos “were involved in any decision relating to individual payments to victims, nor were they able to decide, review, or influence claims made by class members,” he said.

Geragos in a telephone interview said he is “more irate than anything. Talk about no good deed goes unpunished.”

Geragos said he and Kabateck filed a lawsuit when they discovered the problem, brought in an outside accounting firm, wrote a letter to the California attorney general exposing the problem, cooperated with a local prosecutor and survived three prior investigations by the state bar.

“This is just nothing more than a face-saving gesture (by the state bar) in almost unprecedented fashion, waiving confidentiality on an investigation that’s already been done three times over,” Geragos said. “They’re going to quickly discover that they’re going to look like fools. Frankly it’s disgusting.”

In 2019, California attorney Michael Avenatti tried to tie Geragos to his defense as he fought charges that he tried to extort up to $25 million from Nike by threatening to reveal corrupt practices involving college athletes. Geragos for years was a prominent CNN legal analyst, but the network dropped him after those allegations.