Chaos broke out after Synenburg ruled the motion to acquit Biles-Thomas on all charges, including multiple counts of murder, felonious assault, and voluntary manslaughter, court records showed.

“In viewing the evidence in light most favorable to the state, it is insufficient to sustain a conviction. The motion is granted as to all counts. Ladies and gentlemen, this matter has been drawn to a conclusion. I thank everyone for their effort and my heart goes out to the families of the victims,” she said.

Seconds later, an emotional family member got up and lunged in the direction of the defendant located across the courtroom.

A spokesperson for the Cuyahoga County Court of Common Pleas released the following statement regarding the incident.

“Following a ruling in The State of Ohio vs Tevin Biles-Thomas (CR-19-643478-A), a person in the gallery charged toward the defendant. The Court thanks the Sheriff’s Department for their assistance.”

Before ruling on the acquittal, Synenburg re-read the witness testimony, which included inaccuracies in the description of the suspect’s clothing at the time of the shooting. Of the 18 witnesses prosecutors called in the case, only one woman was able to make any kind of identification. She said her recollection of the shooter’s clothing was 75% accurate.

Biles-Thomas’s attorneys didn’t think that was enough, so yesterday, they filed a motion for judgment of acquittal, which Synenberg granted.

“Her best recollection of the shooter’s clothing is 75% accurate, a far cry from the compelling, persuasive evidence one would expect in a matter so tragic and serious,” Synenberg said.

The decision to grant a motion for judgment of acquittal is incredibly rare, according to Michael Benza, a senior instructor of law at Case Western Reserve University School of Law.

“That’s a regular motion, but it is very rarely granted, which gives you an indication about how weak the judge really thought the government’s case was,” Benza said. 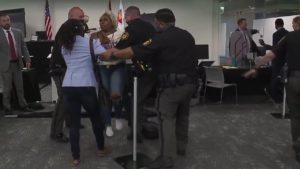 A family member had an emotional outburst and ran to the front of the courtroom after a judge acquitted Tevin Biles-Thomas of all counts during a murder retrial for the 2018 shooting deaths of 3 people in Cleveland. (WEWS)

Now, Biles-Thomas is a free man and cannot be tried for those crimes again.

WEWS spoke with Joseph Patituce, Biles-Thomas’s attorney who said the ruling is a huge relief for his client.

“He’s now run the gauntlet twice. You’ve gone through two full trials where no one has any credibility, has identified him as the shooter,” Patituce said.

He also acknowledged the courtroom outburst and the victims’ families’ pain.

The charges Biles-Thomas faced were in connection to a New Year’s Eve party at an Airbnb in Cleveland when gunfire broke out when a group of men arrived uninvited to a party. Nineteen-year-old DelVaunte Johnson, 21-year-old Toshaun Banks, and 23-year-old DeVaughn Gibson were killed.

In September 2019, after Biles-Thomas was arrested and charged, Simone Biles tweeted that her “heart aches for everyone involved.”

In May, a judge declared a mistrial in the murder of Biles-Thomas.

Jurors told the judge during the third day of deliberations that copies of legal briefs from Biles-Thomas’ lawyers and prosecutors were among the evidence given to them during deliberations.

The paperwork included arguments over whether Biles-Thomas might have acted in self-defense.

WEWS has reached out to Cuyahoga County Court officials for more information on the outburst following Tuesday’s ruling.

The Cuyahoga County Prosecutor’s office declined to comment on the ruling.

This story was originally published June 15, 2021, by WEWS in Cleveland.