KHIMKI, Russia (AP) — American basketball star Brittney Griner didn’t testify on the third day of her drugs possession trial in Russia, but the director of the Russian team she plays for in the offseason said he told the court about her merits.

Griner was arrested in February at the Russian capital’s Sheremetyevo Airport when customs officials said they found vape canisters with cannabis oil in her luggage. She has been jailed since then, facing up to 10 years in prison if convicted. 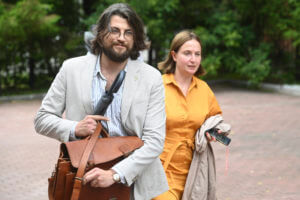 Last week, Griner pleaded guilty. She acknowledged to the court that she possessed the canisters, but said she had no criminal intent and said the presence in her luggage was due to hasty packing. She was expected to testify on Thursday in the court in the Moscow suburb of Khimki, where the airport is located, but did not.

Most journalists were denied access to Thursday’s trial session, but the manager of UMMC Ekaterinburg, for which she plays when the WNBA isn’t in season, said he testified as a character witness.

“Our task today was to tell the court about her characteristics as an athlete, as a person — tell about how she played a big role in the success of the Ektaerinburg club and Russian women’s basketball as a whole,” club director Maxim Rybakov told reporters outside the courthouse

“Today is the first day when we have seen our basketball player since February. Thank God, she feels well, looks good,” Rybakov said.

The next trial session is set for Friday. 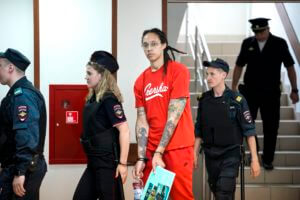 WNBA star and two-time Olympic gold medalist Brittney Griner is escorted to a courtroom for a hearing, in Khimki just outside Moscow, Russia, Thursday, July 7, 2022. Jailed American basketball star Brittney Griner returns to a Russian court on Thursday amid a growing chorus of calls for Washington to do more to secure her release nearly five months after being arrested on drug charges. (AP Photo/Alexander Zemlianichenko)

“I can say that Brittney has always been a very good teammate, so my role here is just to be with her, to support her. We miss her very much, we miss her energy. I was very happy to see her, and I hope this trial will be over soon and with a positive outcome,” said teammate Evgenia Belyakova, who also testified.

With the U.S. government under pressure at home to do more to secure her freedom, her guilty plea last week could be an effort to expedite the court proceedings so any negotiations could move forward. A senior Russian diplomat has said no action could be taken by Moscow until the trial was over.

Griner is one of the United States’ most prominent female athletes, a standout for the Phoenix Mercury and a two-time Olympic gold medalist.

U.S. President Joe Biden and Secretary of State Antony Blinken have said they were doing all they could to win the release of Griner, as well as other Americans the U.S. considers “wrongly detained” by Russia, including former Marine Paul Whelan.

Washington may have little leverage with Moscow, though, because of strong animosity over its military operation in Ukraine.

Russian media have speculated that Griner could be swapped for Russian arms trader Viktor Bout, nicknamed “the Merchant of Death,” who is serving a 25-year sentence in the U.S. after being convicted of conspiracy to kill U.S. citizens and providing aid to a terrorist organization.

Russia has agitated for Bout’s release for years. But the wide discrepancy in the seriousness of their cases could make such a trade unpalatable to Washington. Others have suggested that Griner could be traded along with Whelan, who is serving 16 years in Russia on an espionage conviction that the U.S. has described as a setup.

The State Department’s designation of Griner as wrongfully detained moves her case under the supervision of its special presidential envoy for hostage affairs, effectively the government’s chief hostage negotiator. The classification has irritated Russia.

Asked about the possibility of Griner being swapped for a Russian jailed in the U.S., Deputy Foreign Minister Sergei Ryabkov, the senior Russian diplomat, has noted that until her trial is over “there are no formal or procedural reasons to talk about any further steps.”

Ryabkov warned that U.S. criticism, including the description of Griner as wrongfully detained and dismissive comments about the Russian judicial system, “makes it difficult to engage in detailed discussion of any possible exchanges.”

Griner’s detention has been authorized through Dec. 20, suggesting the trial could last months. Griner’s lawyers, however, said they expect it to conclude around the beginning of August. 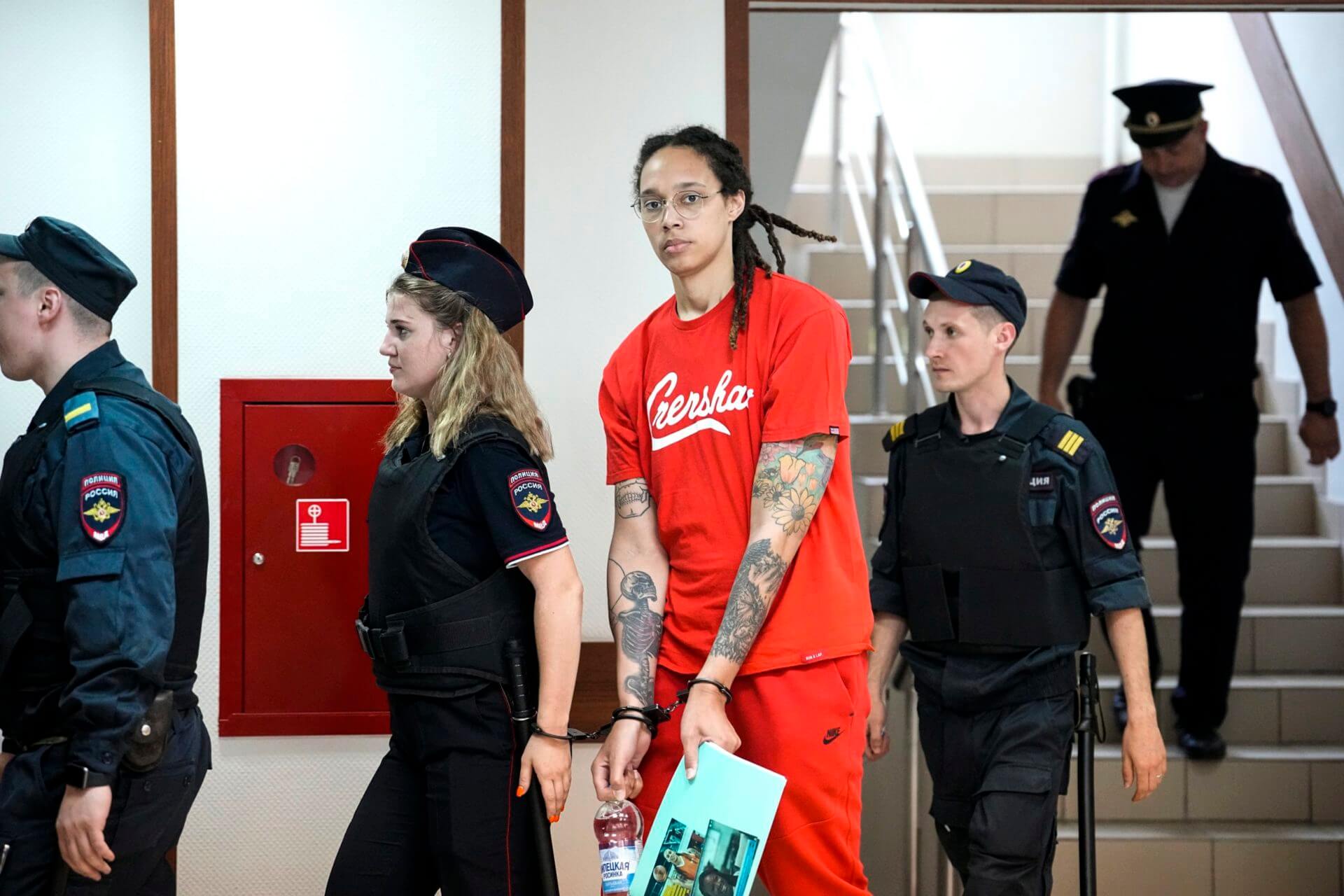 WNBA star and two-time Olympic gold medalist Brittney Griner is escorted to a courtroom for a hearing, in Khimki just outside Moscow, Russia, Thursday, July 7, 2022. Jailed American basketball star Brittney Griner returns to a Russian court on Thursday amid a growing chorus of calls for Washington to do more to secure her release nearly five months after being arrested on drug charges. (AP Photo/Alexander Zemlianichenko)
MORE NEWS