LOS ANGELES (AP) — Federal prosecutors have charged four people in connection with the robbery and killing of an off-duty Los Angeles police officer and allege the suspects are tied to a street gang, authorities said Thursday.

Officer Fernando Arroyos, 27, was fatally shot at about 9:15 p.m. Monday in an unincorporated area of south Los Angeles County. The suspects allegedly targeted him because of two silver chains or necklaces around his neck, authorities said. 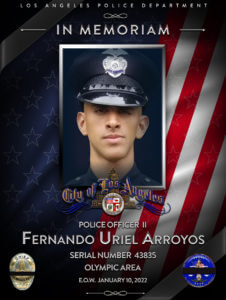 This photo provided by the LAPD shows Officer Fernando Arroyos, who was killed on Jan. 11. Federal prosecutors have charged 4 people in connection with the robbery and killing of the off-duty Los Angeles police officer. (LAPD)

The U.S. Attorney’s Office in Los Angeles announced the charges on Thursday. The sheriff’s department was investigating the case, and took the suspects into custody on Wednesday, because the crime occurred in an unincorporated area of the county.

The defendants are charged with violent crime in aid of racketeering; they are allegedly connected to the Florencia 13 (F13) gang. The crimes were allegedly committed in furtherance of the gang, authorities said.

The violence occurred in the gang’s territory, authorities said.

Another LAPD officer identified Contreras in surveillance footage because the officer had encountered him and Rios in the truck on Sunday during a traffic stop, authorities said.

The suspects are expected to make their first appearances in federal court on Friday afternoon. It was not immediately clear Thursday night whether they had attorneys who could comment on their behalf.

Florencia 13 is a Latino street gang founded in the early 1950s and based in the Florence-Firestone neighborhood of South LA, according to a federal affidavit. The violent group controls drug trafficking in the area and is allegedly overseen by the Mexican Mafia.

Rios, Cisneros and Contreras allegedly admitted, in their interviews with law enforcement, that they are members of the gang and have tattoos related to it, the affidavit states. Authorities also placed people working with law enforcement in jail cells with the suspects to glean more information.

Rios, however, allegedly told investigators that the foursome had been looking to “make money” that night — to rob people of property or cash, according to the affidavit.

Grisham told someone in her jail cell that she had allegedly had participated in a robbery earlier that day.

Around 9:15 p.m., the group spotted Arroyos and his girlfriend, Rios said, and Contreras allegedly told him to “get the chain” and handed him a gun.

Rios and Cisneros allegedly confronted the couple and pointed the guns at them, authorities said. They allegedly stole items from both, including a black walking stick from the officer’s girlfriend, and removed the silver chains — one with a sword pendant — from Arroyos’ neck.

Rios told investigators he saw Cisneros take Arroyos’ wallet, the affidavit states. Cisneros handed Rios the wallet, and Rios later took $100 out and threw it on the ground.

At some point, a shootout began and Arroyos was struck once. He ran toward an alley and collapsed as Rios and Cisneros fled.

Sheriff’s deputies, responding to a call for help, loaded Arroyos into their cruiser and rushed him to the hospital, where he was later pronounced dead.

LAPD Chief Michel Moore, at a news conference Thursday night to announce the charges, lamented that the robbery and slaying were “over minimal property.”

Still, he added: “I will tell you that those two chains and a wallet mean, I’m sure, the world to the family.”

Rios allegedly admitted to firing at least once and said he believed Cisneros also shot at Arroyos. A bullet grazed Rios’ ribcage and Cisneros appeared to have broken his leg.

Surveillance video shows the pickup truck pulling up at a home near the shooting and Contreras can be seen getting out of the truck, authorities said. He is then seen helping an apparently injured Cisneros out of the truck, according to court documents.

All four suspects were in the truck, prosecutors say. The whole group was allegedly at the scene of the robbery and shooting.

Villanueva, during the news conference, said the “depravity” behind Arroyos’ slaying should bring harsher punishments, so detectives took the case to federal authorities.

Under federal charges, the suspects could face the death penalty, or the minimum sentence of the life in prison without the possibility of parole, because Arroyos was killed during the robbery, according to the U.S. Attorney’s Office.

A loaded handgun that allegedly belonged to one of the suspects was found at the scene, but Arroyos’ chains and wallet remain missing.