CHICAGO (AP) — Two men who said they were sexually molested decades ago by a notorious Catholic priest who was imprisoned for molesting other boys have agreed to a settlement of $880,000 from the Archdiocese of Chicago, attorneys announced Wednesday.

The men alleged Norbert Maday sexually abused them repeatedly starting when they were as young as 10 years old while they were alter boys and students at St. Bede the Venerable Elementary School on the city’s South Side, attorneys Jason Friedl and Martin Gould said. 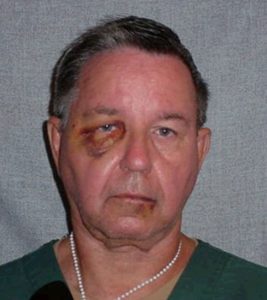 FILE – Defrocked priest Norbert Maday was convicted of child sexual abuse and intimidating witnesses in 1994. He was sentenced to 20 years in prison. He has faced multiple new allegations of sexual abuse since then. (Wisconsin Department of Corrections)

Based on lawsuits, court cases and documents, the two were among at least 14 boys whom Maday molested at the six parishes where he was assigned from 1967 to 1986, the attorneys said, adding that they believe Maday died in recent years.

Archdiocese spokesman Manny Gonzalez declined to comment on the settlement.

Friedl and Gould said the agreement was reached before a lawsuit was even filed, representing a significant shift for an archdiocese that has a history of protecting sexually abusive priests.

“This is a sharp departure from prior responses and it is a good sign (because) the church itself is recognizing what has happened in the past,” said Friedl. “This is an indication of a new culture of protection, healing and accountability.”

Maday figured prominently in reports about the sexual abuse scandal that rocked the Catholic Church in the United States and around the world, as it played out in Chicago. He has been named in lawsuits and in 2014, documents related to Maday appeared among thousands of pages that showed senior Chicago Archdiocese leaders had helped hide the abuse of children.

Those documents revealed that then-Cardinal Francis George had tried to get Maday released early from a Wisconsin prison, where he was detained after a 1994 conviction for molesting two boys.

“It would be a great fulfillment of the millennium spirit to see your captive heart set free,” George wrote to Maday in 2000.

But two years later, George heard from another man who alleged he was sexually abused by Maday.

“Where was the church for the victims of this sick, demented, twisted pedophile?” the man wrote.

George subsequently changed course, writing in 2007 to the Parole Commission of Wisconsin — just before Maday’s scheduled release — that he had formally removed Maday from the priesthood and was severing all ties with him. George died in 2015.

“My first reason is the protection of the vulnerable,” George explained, adding, “It would be a cause of scandal … if he were to return to the Chicago metropolitan area and remain a priest.”

Maday was released in 2007, according to the Wisconsin Department of Corrections’ website and in 2014, the state’s sex offender registry gave his address in Oshkosh, Wisconsin.