CLEVELAND (WEWS) — A Cuyahoga County judge ruled Monday that a Cleveland man was wrongfully imprisoned after he spent more than 27 years in prison before his murder conviction was dismissed in 2019.

Charles Jackson had tears welling in his eyes after Common Pleas Judge Kathleen Sutula announced her decision Monday morning in a brief but emotional hearing. After the Ohio Innocence Project unearthed new exculpatory evidence, Jackson was released from prison in 2018 before his charges were dismissed completely in 2019. Jackson had been serving an indefinite sentence in connection with a murder and attempted murder conviction in 1991. 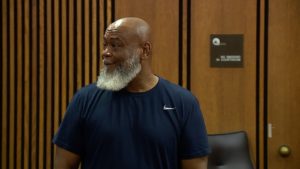 Judge Sutula’s decision to declare Jackson as being wrongfully imprisoned opens the door for the legal process in which Jackson can seek compensation from the state for his time spent wrongfully behind bars. Jackson said Monday’s hearing was significant for another reason: it marks the first time that the state has acknowledged that he was innocent.

“I’m relieved. All these years to be labeled as a monster and to live through that and to feel shame and humiliation and now to be totally exonerated, it feels good,” Jackson said. “I don’t think [the state] could ever make it right. But compensation is a good start immediately to get my life going and to take care of my family and to move on and put this behind me.”

Jackson’s attorneys from the law firm of Friedman, Gilbert and Gerhardstein and officials from Ohio Attorney General’s office agreed in a joint motion that Jackson had been wrongfully imprisoned.

“I don’t think there is any judge that would ever want to imprison an innocent person,” Judge Sutula said as she announced her decision. “Since [the judge that presided over Jackson’s 1991 conviction] is not here to say he’s sorry, I’ll say it for him.”

According to the Ohio Innocence Project, Jackson’s 1991 conviction was primarily based on the statements of two witnesses. Jackson’s attorneys said multiple exculpatory police reports lied and fabricated evidence during the investigation. The photo arrays shown to potential witnesses heavily influenced them, leading witnesses to incorrectly identify Jackson as the suspect.

Jackson and his attorneys have filed a federal civil rights lawsuit against Cleveland, the detectives that investigated his case and others.

“Cleveland murder detectives hid evidence, fabricated evidence and hid witness statements that were completely exculpatory,” said Sarah Gelsomino, one of Jackson’s attorneys. “When police and prosecutors don’t do justice, when they don’t pursue justice, when they intentionally withhold evidence and put the wrong people behind bars, everyone suffers. The ripple effects of that go on and on and on for decades.”

This story was originally published July 11, 2022 by WEWS in Cleveland, an E.W. Scripps Company.