COLORADO SPRINGS (KOAA) — On Thursday, former day care owner Carla Faith and one of her employees, Christina Swauger, were found guilty by a jury on 26 counts of misdemeanor child abuse. Authorities found children behind a false wall in the basement of Faith’s Play Mountain Place day care on Willamette Avenue in late 2019.

The child abuse charges could mean three to twelve months in jail.

In addition, Faith and Swauger were found guilty for attempting to influence a public servant, which is a class four felony. It could lead to two to six years in prison. They were also convicted of obstructing a peace officer. 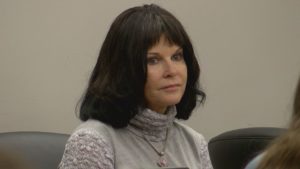 Faith and Swauger’s sentencing date is scheduled on October 21.

An El Paso County jury reached the verdict after deliberating for less than four hours.

Family members were in the courtroom, with some of them crying and holding hands as they heard the guilty verdict.

The day care was one of two facilities Faith operated.

In addition, Faith and Swauger were found guilty for attempting to influence a public servant, which is a class four felony. It could lead to two to six years in prison.

During the trial, several parents became emotional in court when prosecutors showed body-worn camera video from the day the kids were found. In the video, Swauger is seen telling officers she is a “friend” of the owner, not an employee, and that there was only one child at the facility at the time.

When asked if there is a basement, Faith said no. When asked why there are so many backpacks in the facility, Faith told the officer they were going to be cleaned for a soccer team. “That doesn’t sound very likely to me,” said the officer.

“The level of deception is actually quite remarkable,” said lead prosecutor Andrew Herlihy. “It was hours of deception.”

The parents of 19 children who attended the daycare filed a civil suit against Faith in December 2019.

In testimony, a Colorado Springs fire inspector said several code violations were found in the facility. Additionally, a Colorado Springs Police detective said there was a desire to file more serious charges against Faith, alongside the allegations of child abuse and attempt to influence a public servant.

In the counter-closing arguments, defense attorney Josh Tolini said it wasn’t a situation where kids were kept continually in cramped spaces. They were spread out, fed, got naps, and did arts and crafts. “They were loved,” said Tolini. He says there is evidence the kids were well taken care of because they were happy.

At this statement, a parent walked out of the courtroom while Tolini argued a sign the kids were happy was their willingness to go back to the day care, and parents kept taking them.

Tolini said his client should be held accountable for running an unlicensed child care facility. He also told the jury what Faith did was obstruction of a police officer, not an attempt to influence. He denies the child abuse charges.

“They’re trying to stretch the facts of the law to get charges that quell the emotion here,” said Tolini about the prosecution’s case. “This is not an inherently dangerous situation.”

Continuing the defense, the attorney for Swauger reminded everyone that the case is being heard in a court of law, not public opinion, which he feels has already convicted his client.

“It’s bad, I get it, it’s emotional. When the officers go downstairs with the gun drawn, it’s dark… there’s all these little eyes. It looks horrible… But you flick on the lights, and the kids are being held… there’s juice boxes… it’s not quite as bad as it would seem,” explained attorney Will Cook, referencing the body-worn camera video from when the children were found.

Cook also argued there was no evidence of a child being physically hurt. “Whatever the harm may be, you didn’t hear about it (in this courtroom),” said Cook.

In 2019, officers assisting child welfare inspectors searched Play Mountain Place on November 13 where they found the false wall hiding access to a basement. When they searched the basement, they found 25 children being supervised by two adults. One child was picked up by their parents as officers arrived. The officers reported that many of the children in the basement had soiled or wet diapers, and were sweaty and thirsty.

In the initial investigation, Faith and three employees were arrested by Colorado Springs Police.

Police said when they arrived, Faith was refusing to cooperate despite officers hearing the children. Faith told officers they could search the daycare and the main house. An officer saw a stack of backpacks in a closet that Faith said belonged to a soccer team, and that she was cleaning them.

Officers heard music coming from the basement and asked Faith how to get to the basement. Court documents and body-worn camera video reveal she told them the home did not have a basement.

Court documents said officers found the wall when one of them bumped into it. The wall moved when the officer made contact with it and saw “two parallel scrape marks on the wooden floor” that led away from the wall.

The officer then moved a plant, saw a “small seam” between the wall and “false wall,” and pulled the false wall to the right to reveal a stairwell leading to the basement.

They found 25 kids hidden behind the “false wall” in the basement of Play Mountain Place with two adults. One of the children had been picked up by their parent as officers arrived.

This story was originally published August 26, 2021 by KOAA in Colorado Springs, an E.W. Scripps Company.