BOULDER COUNTY, Colo. (KMGH) — The man accused of murdering 10 people at a Boulder King Soopers in March was ruled incompetent to stand trial, according to court documents. Prosecutors have asked for a second evaluation.

In Ahmad Al Aliwi Alissa’s first competency evaluation, he indicated an understanding of the charges against him, his potential sentences and the workings of the court, according to court documents. However, the doctors “concluded that their ‘provisional’ mental health diagnosis of Defendant ‘limits his ability to meaningfully converse with others.'” 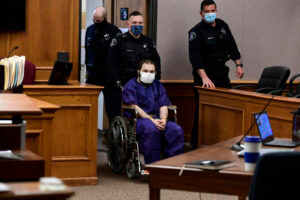 They noted his “‘superficial responses’ to hypothetical legal situations indicate a ‘passive approach to his defense’ and ‘potential over-reliance on his attorneys,'” according to the court documents.

The prosecutors in this case had several days to request a second hearing, and did so Monday morning.

Family members of the shooting victims are reacting to this latest development in the case while trying to keep faith in the legal process. Robert Olds is the uncle of King Soopers employee, Rikki Olds, who was killed while she working at the store that day.

“You don’t get to start the grieving process, I haven’t. It’s been, like I said, from shock to anger, and with all these other steps the anger increases. You can’t get to that grieving stage,” said Robert Olds.

In early September, a judge ordered a mental competency evaluation for the suspect. Later that month, Judge Ingrid Bakke ruled that two state doctors who were evaluating Alissa could have more time to complete an evaluation to determine if he could stand trial. This gave doctors five weeks instead of three. Bakke ordered for Alissa to be evaluated at the Boulder County jail instead of the state hospital in Pueblo.

“We know there’s a process, and we know it could be years, but it doesn’t make it any easier,” said Olds.

Alissa faces 10 counts of first-degree murder and dozens of other charges in connection with the March 22 shooting at the King Soopers on Table Mesa Drive in Boulder.

Alissa is accused of killing the following victims at the King Soopers on Table Mesa Drive in Boulder:

This story was originally published October 11, 2021, by KMGH in Denver, an E.W. Scripps Company.