LOUISVILLE, Ky. (AP) — A council of Kentucky prosecutors said Friday it does not have the legal authority to appoint another special prosecutor in the police shooting of Breonna Taylor, despite a plea from Taylor’s mother.

Tamika Palmer had petitioned the Kentucky Prosecutors Advisory Council in October for a new special prosecutor to investigate police actions in her daughter’s death. In September, a grand jury declined to indict any Louisville police officers on charges connected to Taylor’s shooting death during a warrant search. Kentucky Attorney General Daniel Cameron’s office had acted as special prosecutor in the case after Louisville’s local prosecutor recused himself in May. 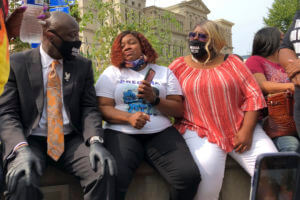 A member of the council, Warren County Commonwealth’s Attorney Chris Cohron, said the council members reviewed the relevant case law but said they have no “legal authority to fulfill the request that has been submitted.”

Cohron said “no basis in case law or statute exists” to make the appointment, and he made a motion to deny the request. The council voted unanimously in agreement.

The meeting was broadcast online, and several listeners from the public shouted “Oppose!” after the vote was taken.

Palmer wrote in a letter to the council in October that on the day of the grand jury decision in September, Cameron told her “the grand jury declined to indict other officers and that his team had done the best they could.”

But since then, three members of the grand jury, speaking anonymously, have come forward and said the panel was not given the chance to explore charges related to Taylor’s shooting death by officers.

Taylor, a Black emergency medical worker, was shot five times by white officers on March 13. Her boyfriend, fearing an intruder, told investigators he fired one shot from a handgun after police entered Taylor’s apartment to serve a narcotics warrant. No drugs or cash were found at her home.

Former police Officer Brett Hankison, who was fired in June, was indicted by the grand jury on three counts of wanton endangerment for firing into a neighbor’s apartment.

Two other officers who fired their guns during the raid were not charged by the grand jury.