CIRCLEVILLE, Ohio (AP) — An infant died and another young child became very ill after they ingested fentanyl in their family’s apartment, authorities said. 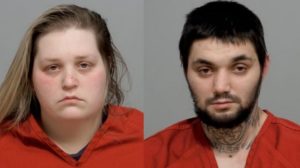 Officers responded to a hospital Sunday after a 20-month-old child and their 3-year-old sibling were taken there, authorities said. The infant wasn’t breathing while the older child was ill and vomiting.

The infant was pronounced dead a short time later, but the 3-year-old recovered and was later released to relatives. Their names and further information about them was not disclosed.

Authorities say fentanyl was found in the family’s apartment. They said Lee and Roush admitted to using and selling narcotics, but don’t know how the children got the fentanyl.