By KATE BRUMBACK The Associated Press

ATLANTA (AP) — A man whose toddler son died after he left him in a hot car for hours is asking Georgia’s highest court to overturn his convictions for murder and child cruelty.

Justin Ross Harris, 41, was convicted in November 2016 on eight counts including malice murder in the death of his 22-month-old son, Cooper. A judge sentenced him to life without parole as well as 32 more years in prison for other crimes.

Harris has appealed his convictions for murder and first-degree child cruelty. The Georgia Supreme Court scheduled oral arguments for Tuesday.

Harris, who moved from Tuscaloosa, Alabama, to the Atlanta area for work in 2012, told police he forgot to drop his son off at day care on the morning of June 18, 2014, driving straight to his job as a web developer for Home Depot without remembering that Cooper was still in his car seat.

Cooper died after sitting for about seven hours in the back seat of the vehicle outside his father’s office in suburban Atlanta, where temperatures that day reached at least into the high 80s.

Prosecutors argued at trial that Harris was unhappily married and killed his son on purpose to free himself. Defense attorneys described him as a doting father and said the boy’s death was a tragic accident.

Police officers who interacted with Harris after his son’s death didn’t think he acted the way a father should under the circumstances, and began investigating all aspects of his life, according to a defense brief filed with the high court.

Evidence showed he was a loving and attentive father, even if exchanging sexually explicit messages and graphic photos with women and teenage girls and meeting some of them for sex revealed that Harris was not a great husband, the defense brief says.

Investigators “cherry picked the mountain of electronic data to support the conclusion that (Harris) murdered his son, ignoring contrary evidence,” the brief says.

Harris’ lawyer, Mitch Durham, argues that the judge shouldn’t have admitted evidence of Harris’ extramarital communications and in-person trysts at trial because his sexual misconduct had nothing to do with the death of his child. Prosecutors argue that plenty of evidence was presented to allow jurors to infer that Harris “acted out of a desire to be free of his wife and son so that he could pursue his self-described sexual addiction.” 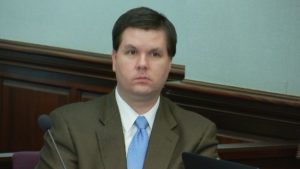 Durham argues that there was insufficient evidence to show that he intended to kill his son and that some of his internet searches, activity and messages were twisted to fit that narrative. He says the evidence of sexual misconduct served only to prejudice the jury against Harris.

The state, represented by the Cobb County district attorney’s office and the attorney general’s office, argues that the evidence of his sexual conduct outside his marriage is not irrelevant because it illustrates his motive for killing his son. To conclude that Harris did not act with malice or criminal negligence by leaving his son in a hot car, the high court “would have to ignore the evidence about Harris’ double life and its deep connection to his motive for killing Cooper.”

Durham also says the trial judge made mistakes in requiring the defense to disclose the notes of a defense expert, allowing the introduction of a 3D animated video and limiting the cross examination of certain witnesses. Each of those errors is enough to justify a new trial, but even if the high court finds each of them alone to be relatively harmless, their collective prejudicial effect is sufficient to authorize a new trial, Durham argues.

Prosecutors, on the other hand, say the trial judge correctly decided these issues and Harris’ convictions and sentence should be upheld.

“Cooper Harris did not get a second chance on June 18, 2014, and his father has fallen short of demonstrating that he is entitled to a second chance in this appeal,” the district attorney’s brief says.